Basketball: Women’s Division One title up for decision as top four teams do battle 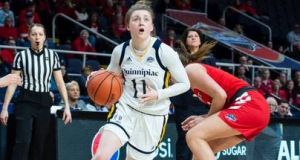 EdelThornton: Meteors will look to her to lead the charge against Panthers. Photograph: Getty Images

The women’s Division One league title is up for decision this weekend as the top four teams prepare to do battle in Leixlip.

The Meteors and Panthers game is a rematch of the women’s Division One Cup final back in January, which Portlaoise won by 75-51. Yet Meteors have been in flying form since then , and have gone on to scoop the Northern Conference title following a superb run of league form. They will look to Cork native Edel Thornton to lead the charge, alongside the on-form Lauren Grigsby and Sarah Kenny.

Panthers are also having a superb season, and their mix of youth and talent has led them to Cup glory and helped them to challenge for top position in the league.

They will look to the experience of American Trudy Walker and Deirdre Tomlinson to help guide them, but have a host of talented young stars to bring in, including Ciara Byrne, Gillian Wheeler and Sarah Fleming all.

The two sides met just last Saturday evening in the regular season, with Meteors coming out on top 102-78, with superb displays from Grigsby (27 points) and Thornton (20 points).

The other semi-final sees St Mary’s and Ulster University meeting for the second time in seven days. The sides met in Kerry last weekend, with St Mary’s managing to take the spoils, winning by just one basket in the end, 69-67.

They were led by a superb display from Lorraine Scanlon, who finished the game out with 25 points, while it was Kollyns Scarborough who shone brightest for Ulster University, knocking down 27 points.

St Mary’s will need Scanlon and Denise Dunlea to be in top form to keep the tough Ulster side at bay this weekend as the Belfast outfit have a host of weapons including Scarborough, Lexi Posset and Aoife Callaghan to help them.

The semi-finals tip off from 12.30pm on Saturday in Leixlip Amenities, with the winners of both semi-finals going on to contest the final on Sunday, where the Women’s Division One league champions will be crowned and promoted to the Women’s Super League for next season.

Speaking of the Women’s Super League, this weekend sees the last round of fixtures taking place, and the race for play-off spots is on. DCU Mercy were crowned champions last weekend, and they travel to Cork this Sunday to take on UCC Glanmire, who will hope that they can secure a win over the Dubliners to try and finish the league in second place.

They will be watching the result of Maree’s game in Galway on Saturday, as Joe Shields’ charges are level with Glanmire on the table, and will be hoping to take home a win against IT Carlow Basketball.

Elsewhere, Fr Mathews are on the road to Dublin where they meet Cup champions Killester in what is set to be a big game. Fr Mathews currently sit just outside the play-off spots in seventh place, and will need a lot of results elsewhere to go their way to try and move up the table.

Liffey Celtics welcome bottom side Marble City Hawks to Kildare, while WIT Wildcats will be hoping to secure a win in their last game as they travel across to Brunell in Cork.

Meanwhile, just two weeks of fixtures remain in the Men’s Super League regular season, with Neptune and Éanna both facing into a double-header weekend of games. Neptune make the long trip up to Belfast Star on Saturday evening, where they will be hoping to pick up an important road win. Star are in dazzling form of late though, and will be tough to topple in their home court.

Elsewhere, Tralee Warriors welcome Dublin Lions to Kerry, while neighbours Killorglin are also at home and will play host to UCD Marian in what is set to be an extremely tough battle.

Meanwhile, a big Dublin derby awaits Templeogue as they welcome Killester, while DCU Saints hit the road to Galway where they will face off against a tough Maree side.