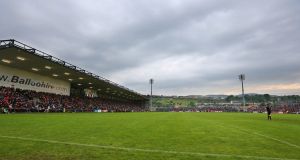 Down had promotion snatched from under their noses in Newry, as neighbours Louth retreated back across the border with a deserved victory.

The Mournemen started the day on top of the table, but this agonising defeat, along with wins for Laois and Westmeath, put paid to their hopes of an instant return to Division 2.

It took a while to work out the permutations, but Laois are promoted, and they will be joined by Louth or Westmeath, pending the outcome of their re-fixed clash next weekend.

When that news eventually reached Down boss Paddy Tally he was understandably deflated.

“It’s gutting,” he said. “We shouldn’t have been relying on anyone else though. Our destiny was in our own hands today and we didn’t take it. But that’s the way it goes; we weren’t good enough.”

Louth, can still succeed where Down failed and bounce straight back to Division 2 and they will take great confidence from this win.

Despite facing a gale-force wind, they adjourned at half-time with their noses in front, 0-4 to 0-3, and pulled six ahead by the 45th minute.

However, a fortunate, but very well finished Darren O’Hagan goal threw Down a lifeline and they very nearly pulled off a great escape.

But Louth clung on and another win next weekend would see them join Laois in Division 2 next season.

Selector Liam Kelleher feels they are in “bonus territory” and insists they are looking forward to the showdown with Westmeath.

“We used the ball very intelligently and it was a very positive performance,” said Kelleher. “The goal brought them back into it, but our keeper was adamant the ball was over the end line [in the build-up]. From our point of view we went back down the other end and got a point straight away and that showed a bit of maturity. They showed great character to hang on and they’re looking forward to the Westmeath game now.”