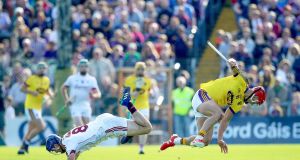 The All-Ireland champions have had a pretty satisfying six days. Two wins from two against their main rivals in Leinster, and in truth they’ve hardly been troubled. Against Kilkenny and Wexford, they have conceded just one goal and nine points from play. They are dialled in for summer – and if you don’t know, now you know. And now they have a Leinster final to look forward to.

Galway took the initiative early, with a goal from Conor Whelan on the back of a brilliant run from Padraig Mannion. He fairly rampaged through the heart of the Wexford defence, playing a one-two with Johnny Glynn before arrowing a shot goalwards. Mark Fanning in the Wexford goal did well to save, but Whelan was on hand to first time it to the net.

James Skehill was getting massive distance in his puck outs, and Johnny Glynn and Conor Cooney proved a novel big man/small man combination – novel given the small man in this particular equation is 6’3” and 15 stone.

Glynn didn’t score himself in that half, but he was proving an effective battering ram, with the Conors Whelan and Cooney wielding the stilettos on either side of him, Cooney scoring four times before the break.

Rory O’Connor was off-target from no more than 25 yards out with his first free, but he settled thereafter and had six by the break, five from frees, but Wexford were getting little or nothing from Lee Chin and Conor McDonald up front and Galway ambled in 1-12 to 0-9 ahead at half-time.

Davy Fitzgerald was visibly upset at some of the refereeing decisions at the end of the first half, despite his team coming out on the right side of a 13-6 free count, and kept his side in the dressing room for a couple of minutes extra at half-time.

But, even after all of that, Galway knifed the first two scores of the half inside a minute, through Whelan and a Canning sideline ball and that was the game. Rory O’Connor kept Wexford respectable, ending the day with 12 points, 10 from frees, but Galway were insatiable.

They are more and more at ease with using their physicality throughout the field, and when they work as hard as they did here – personified by two point-saving hooks inside a minute by Whelan and Canning in the second half, long after the game was won – they are an impressive, obdurate, commanding leader of the hurling pack at this moment.