Ross Munnelly swings it around for Laois against Armagh 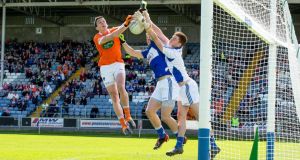 Armagh’s Rory Grugan scores a goal despite the attentions of Laois’ Mark Timmons and Graham Brody during the All-Ireland SFC Round 1A Qualifier replay at O’Moore Park in Portlaoise. photograph: Morgan Treacy/Inpho

Two weeks ago Laois thought they had done enough when they had three points to spare at full-time, but the discovery that they had exceeded the number of substitutes allowed saw the game refixed.

Only 1,000 people watched the first game but that was almost doubled when the sides met in brilliant sunshine although the opening half was very disappointing.

The game was15 minutes old when Michael McKenna registered Armagh’s only score of the opening half. At that stage Laois led with three points from Niall Donoher, David Conway and Darren Strong.

The turning point of the half was a good Laois move which saw centre back Kieran Lillis set up Conor Meredith for a well-taken goal, his second in this year’s qualifiers.

Midway through the opening half Laois defender Damien O’Connor was sent off on a black card in a controversial off the ball decision.

Armagh were a transformed team on the restart, scoring the opening three points, the first of those coming from half-time substitute Colm Watters.

Laois had their opening score from John O’Loughlin, then Armagh produced their best football of the championship and from the 43rd to the 56th minute they kicked 1-4, centre-half forward Rory Grugan kicking 1-1.

Laois trailed by two points with 22 minutes remaining but the introduction of long-serving Ross Munnelly changed the game again in the favour of the home side.

With five minutes remaining, controversial substitute Gary Walsh put Laois back in front with a superb point from a free and following a foul on the same player, Armagh midfielder Aaron Findon received a straight red card.

John O’Loughlin put two points between the sides and Armagh narrowed the gap with a point from Stefan Campbell but Laois hung on to earn a trip to Ennis next weekend to take on Clare.