Also wins for Carlow and Wexford in O’Byrne Cup action 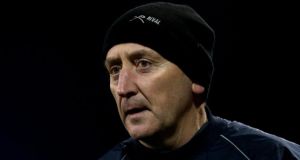 Offaly manager Pat Flanagan has had a greast start to the O’Byrne Cup. Photograph: James Crombie/Inpho

Offaly had things very much their own way when they beat a very disappointing Maynooth University outfit in Tullamore 1-17 to 0-3.

While qualification eluded Offaly, the O’Byrne Cup served its purpose for them and Pat Flanagan’s charges have now laid a solid foundation stone for the start of their National Football League Division 4 campaign in a few weeks time.

A win over Laois, an encouraging display in a defeat by Dublin and this free scoring performance will have done their confidence the world of good as they begin to focus on their early season target of league promotion.

This was a good performance by Offaly but the standard of opposition has to be taken into account and in this case, it was very poor.

Maynooth failed to score in the second half and while they had their moments in the first half, this was an afternoon to forget for them.

Maynooth had first use of a strong wind and they battled well in the opening quarter. They were level, 0-3 each, after fourteen minutes but amazingly, they failed to score again. Even at that stage, Offaly were controlling the pace of the game and with Bernard Allen in outstanding form, they pulled clear to lead by 0-7 to 0-3 at half time.

Offaly wasted little time in putting the issue beyond doubt early in the second half. They got four unanswered points to pull eight clear and William Mulhall’s neatly taken goal gave them a 1-11 to 0-3 lead after 51 minutes.

Maynooth’s heads dropped completely after this and Offaly went on a shooting spree to win very easily.

Wexford had matters very much their own way as they gained a comfortable four point victory over Wicklow in their meaningless O’Byrne Cup senior football game played in pairc Ui Siochain, Gorey, on Sunday afternoon.

With DIT having already qualified from the group the respective managers were left with preparing a number of new players for the league, but it was Wexford who held control for most of the seventy minutes, with Wicklow somewhat flattered to be within four points of their opponents at the finish - 2-15 to 2-11.

After the sides had traded two opening points apiece, further points from Dermot Flood, free, and Declan Murphy, gave the homeside a two point lead before Darren Hayden powered home a fine twenty-fourth minute goal for the garden county leaving them leading 1-2 to 0-4.

Midfielder Paddy Byrne brought the sides level, but it was a Paidi Barden thirty-second minute goal that gave the homeside control as they led 1-8 to 1-5 at the interval.

Both managers took the opportunity to give players some game time, while Wicklow gave themselves brief hope when Conor Foley took advantage of a mix-up in defence to box the loose ball to the net, leaving it 2-11 to 2-7, with seventeen minutes remaining.

The sides went on to share four points apiece in the closing fifteen minutes but it was some desperate defending from the visitors defence that denied Kevin O’Grady a goal, while in a late flourish it took a fine double save from home keeper Shane Roche to deny sub John McGrath.

The home county was never headed and had the tonic of a goal within the first minute when full forward Hughie Gahan got the final touch to a long ball from midfielder Darragh Foley. Louth fought their way back into strong contention but were hit by a second goal for the Barrowsiders from midfielder Seán Gannon in the 27th minute as Carlow assumed a 2-3 to 0-6 interval lead.

A three point lead was an unflattering interval lead for the home county who had spurned a whole host of good goal-scoring opportunities - they could have been well out of sight by half time.

A third Carlow goal three minutese after the restart did put O’Brien’s men into a 3-3 to 0-6 lead further when Darragh Foley’s shot took a deflection off Louth right corner back Kevin Toner and into his own net.

As the home county continued to spurn good chances for goals it allowed Louth to remain in contention and the Wee County made it uncomforbable for their hosts late on after subtitute Seán McCann scored his side’s goal in the 62nd minute. But Carlow held on for a deserved 3-8 to 1-12 victory.

Wrapping up the day’s O’Byrne Cup action, DIT had to work hard to see off the persistent challenge of IT Carlow before emerging three point winners - 1-12 to 1-9.

There was early drama when a second minute DIT penalty by Conor Madden was well saved by Carlow goalie Robert Samson.

The Dublin students did break through for a 16th minute goal from Paul Brogan though which was cancelled out in the 27th minute by a fine finish from Carlow’s Chris Healy. DIT led 1-4 to 1-3 at half time.

Although the home side did lead 1-7 to 1-5 into the second half, DIT, with wind assistance, rattled off a series of unanswered points with Glenn O’Reilly, Paul Brogan, Ciarán Reddin, Conor Grimes and Cillian Lynn finding the target.

1 Every yellow jersey winner must still feel guilty by some association
2 Matt Williams: The sky is not falling in on Irish rugby - but Ireland do need a new plan
3 Kevin Babington: Learning to live again after life changed forever on Long Island
4 Weekend Club GAA previews: Kerry football and Kilkenny hurling deciders top bill
5 Superfan John Murphy keen to keep streak going and make it 80 not out in Donegal
Real news has value SUBSCRIBE