Monaghan complete Super 8 picture as they see off Laois

Malachy O’Rourke’s side will face Kerry, Kildare and Galway over coming weeks 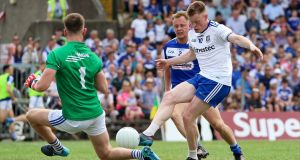 Monaghan’s Ryan McAnespie has a shot saved by Laois goalkeeper Graham Brody during the All-Ireland SFC Round 4 qualifier at Páirc Tailteann in Navan. Photograph: Tommy Dickson/Inpho

Monaghan became the final team to book their place in the Super 8s following a five-point win over Laois in Navan on Sunday afternoon.

They made the most of an industrious first half that saw them lead by nine points at one stage and while Laois staged a very brave comeback in the second and reduced the gap to four late on, the Farney men had enough in store to pull through

The prize for the win is huge – with Super 8 games against Kildare in Croke Park next Sunday, at home to Kerry the week after and then a trip to Galway on the August Bank Holiday weekend.

They were far too powerful and intense for Laois in that opening half and were 0-6 to 0-1 up after 15 minutes. Conor McManus was his usual self while Shane Carey pointed three times from play, Rory Beggan landed two long-range frees and Karl O’Connell pointed twice from wing back. By the 30th minute they were 0-13 to 0-4 up and well in control.

A Paul Kingston goal gave Laois a boost but they still trailed 0-14 to 1-4 at the break.

That could have been even greater only for the individual brilliance of Graham Brody, the Laois goalkeeper pulling off three stunning one-on-one saves in the opening 35 minutes.

And Brody was outstanding after the break too, making four more stops that will have him as a leading contender for an All Star nomination.

“We created a lot of chances which is a big positive in itself,” said Monaghan manager Malachy O’Rourke after the game.

“We’d have liked to finish them better. I think we had six or seven goal chances and didn’t convert any of them. That’s obviously an area we’d like to improve on.”

Donie Kingston, Evan O’Carroll and Ross Munnelly all added points in the second half to get Laois right back into contention and when Colm Begley pointed from distance in the 65th minute there was only four between them.

But Monaghan weathered the storm and Ryan McEnespie’s second of the half eventually got them over the line.

Laois boss John Sugrue reckoned that coming from Division 4 left Laois chasing the top teams at this stage of the championship.

“While it [winning Division 4] gave us momentum at the start of the year, I don’t think it helped us as the year went on. The pace of the game, our pace of thought at times was a small bit off. That’s what you got to deal with.”