‘My goal is to get to Paris without a crash, without hindrance, without misfortune’ 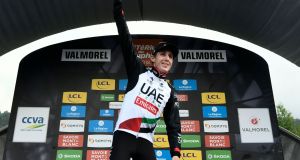 Dan Martin after winning the fifth stage of the Criterium du Dauphine on June 8th. “You can lose the Tour on any day, and that’s what makes it so difficult.” Photograph: Getty Images

A map of the 2018 Tour de France is placed in front of Dan Martin, and he begins to run his finger over it, slowly at first, then more steadily.

From the Grand Départ at Île de Noirmoutier, a Breton quartet, a taste of the Hell of the North, then the Alps, including a potential race-definer up on L’Alpe d’Huez, into a tour stronghold at Carcassone, followed by some Pyrenean familiarity, then the spicy finale of a mountain time trial in the Basque country, including the Col de Pinodieta with its 22 per cent uphill gradient.

Plus the novelty of the short, sharp 65km Stage 17 to Saint-Lary-Soulan on Wednesday, July 25th, arguably the most intense mountainous stage in Tour history.

At age 31, riding in his sixth Tour, and finishing sixth last year despite a near back-breaking crash on Stage 9, Martin begins to nod approvingly – especially the break from tradition by putting the Alps first, then the Pyrenees after. Overall, then, a bit different this year?

“I’m happy with that, it suits me, because I like the Pyrenees. It’s a strange Tour, really split 50-50. You see the first nine days more or less flat. Maybe 20 mountains points. Then the next six days maybe 260 points.

“You can lose the Tour on any day, and that’s what makes it so difficult. It’s that level of concentration that you need to be able to maintain, everyday, not make mistakes and stay focused. And not just on the bike.

“Those three days in the Alps, which we recently previewed, are absolutely brutal. And especially hitting them after nine days, or two weeks effectively, of riding on flat roads. That transition into the mountains is going to be really, really tough. For everybody. It’s going to be a complete war of attrition.

“Then look at the Alpe d’Huez stage [175.5km on Thursday, July 19th], that’s going to be about six hours on the bike. After two days in the mountains before that. And then you don’t really get a break until Paris, at all.”

Is there not some relief after the Alps?

“Obviously this stage is flat [Stage 13 on Friday, July 20th], from Bourg d’Oisans to Valence), but it’s notorious for crosswinds. It’s a very, very windy area. And then this hilly one [Stage 15 into Carcassonne, on Sunday, July 22nd)] has a big mountain in the last 30km. So there’s literally no off-day. There’s never, never an off-day in the Tour. But there are some relaxed days.

“Obviously last year in the Tour, the two days after my crash were the easiest days of the Tour, and that allowed me to recover enough to not lose too much time in the Pyrenees. This year there are no days off. All the flat days are in the first part, all the hilly days in the second part. You could very well see a rollercoaster of a race, guys losing time one day, making it up the next. Everybody has a bad day at the Tour. It just depends on whose bad day is the least bad.”

Ultimately would you describe the route as daunting, exciting, or how do you think it will suit you?

“And I think psychologically, it’ll be the most testing Tour de France in a long, long time. They’re all hard, but every day is a challenge, and a marked challenge from the start.

“You go through the road book that day [the Sunday, July 8th, into La Roche-sur-Yon), very high risk of crosswinds. There is no day when you can have any sort of break, physical or mental.”

After finishing sixth last year do you feel a podium finish is a genuine target?

“That would be a big box ticked in my career, but I never set goals. My goal is to get to Paris without a crash, without hindrance, without misfortune. And it will probably be the most difficult Tour de France to do that.

“Look at the Roubaix stage [Stage 9 on Sunday, July 15th, the 156.5km from Arras Citadelle to Roubaix which features 21.7km of cobbled road in 15 different sections]. If you have a flat tyre at the wrong moment you could lose 10 minutes. And your race is over just because you’ve had a mechanical. It’s the same for everybody.

“I’ve an incredibly strong team [UAE Emirates] around me this year to protect me for the first part, and if I can get to that rest day in Annecy [on the Monday, July 16th], it will...not be a relief, because then the hard works starts, but you would be back in control of your own destiny in some ways.”