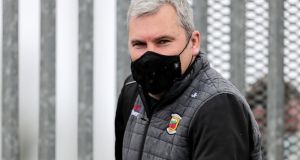 James Horan: “We don’t see it as young and old at this stage. The guys are training together, whoever does well plays. That is where we are at.” Photograph: Laszlo Geczo/Inpho

If the last thing James Horan could have imagined in his second coming as Mayo football manager was the prospect of all All-Ireland semi-final against Tipperary, in an empty Croke Park, on the first Sunday in December, with half his starting team made up of championship rookies, the only thing he’s trying not to imagine now is the prospect of losing it.

Which is why, when asked about Tipperary’s progress through the winter football season of seismic shifts, Horan plays down any suggestion of it being a surprise, knowing full well the only likely surprise about Sunday would be a defeat for Mayo.

As we have done all year, we won’t look too much at what others are doing

“I don’t get shocked anymore in football,” says Horan, who is in his second season of that second coming, having previously acted as Mayo manager from 2011-14.

“So much stuff can happen in Gaelic football. Particularly this year. Our opponents are a really good team, they have shown that for a number of years, they’re strong. A lot of them have been together since minor and they have some very good players, and their own way of playing, and are very competitive.

“With that game I wasn’t at all surprised, to be honest. As we have done all year, we won’t look too much at what others are doing. We have more than enough ourselves to try and get right and improve and develop and that’s where we will put our energy.”

In his first coming, Horan guided Mayo to back-to-back All-Ireland defeats (to Donegal in 2012, and Dublin in 2013) and also four successive Connacht titles, the one-point win over Galway in last month’s Connacht final adding to the league title Mayo also won last year.

He has no championships history with Tipperary, however – the 2016 All-Ireland semi-final, plus the qualifier tie two years later, played out under previous Mayo manager Stephen Rochford.

Surprising or otherwise, the somewhat seismic shift in his own panel this season (Mayo had 10 rookies in that Connacht final win, including four substitutes) happened perhaps partly by accident, partly be design, and all for the betterment of Mayo football.

“There is a few things to it I suppose, there is the natural evolution of a team, that happens,” says Horan, who has also had to deal with leaving players like Séamus O’Shea, Keith Higgins and Colm Boyle off his match day panel.

“There are some conversations where it is one of the tougher sides of the job. But you’ve seen a lot of those players play over the last decade, and how committed and how straight and honest they are and how they play.

Time waits for no man as well, if guys are playing well they will get their shot

“We always say that players are the first to know, players know. And it’s funny if you laid out the criteria, the guys in form and the guys that are playing well regardless of whether they are just in or here ten years, or age or size, it doesn’t matter, the player in form plays and we have a clear criteria on that.

“It makes things clear for everyone, it makes it more straightforward maybe, but still guys are going to be very disappointed for sure. That’s the nature of sport, or high level sport.”

Whatever about Tipperary’s progress, their Munster final win over Cork delivering a first provincial title since 1935, Horan also believes Mayo have made the most of the knock-out campaign, including the short run up to it after the club season.

“The way the season went this year, in particular, with the shop window of the club championship, it had a lot of players who really shone through that.

“Then the inter-county season straight after, in such a short period, just made it a really interesting dynamic and probably added to a lot of players being involved. The natural order of things is that there has been a strong team there for a number of years.

“Time waits for no man as well, if guys are playing well they will get their shot. It’s all that mix, I suppose, and we are lucky we have a lot of real quality young guys as you’ve seen over the past number of weeks.

“We are just hoping to continue that, we don’t see it as young and old at this stage. The guys are training together, whoever does well plays. That is where we are at.”

Another notable addition this season has been Ciarán McDonald, Horan praising his ability to keep surprising with his ideas, just as he did as a player for Mayo and Crossmolina.

“Firstly he is a brilliant coach and he has worked with the development squads in Mayo for a while now. Himself and James Burke in particular work really well together.

“Ciarán has an interesting take on the game and we are very aligned on what are the key things that are needed for Gaelic at a high level so definitely aligned there. He has some very good ideas on where we can make further gains and what we can do and any and all ideas are welcome. We try things, some of them work, some of them don’t, but we’ll definitely keep trying things to try to get better and better.”