41 national governing bodies to share out €3.25m over two-year cycle 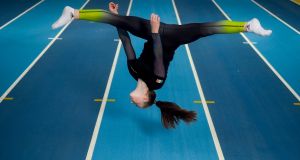 Irish gymnast Emma Slevin puts on a display during the Sport Ireland announcement of the multi-year investment of over €3 million in the Women in Sport programme at the National Indoor Arena in Abbotstown. Photograph: David Fitzgerald/Sportsfile

One day after being announced as the successor to Colin Bell as the head coach of the Irish women’s team, Vera Pauw now knows what she is facing in terms of future funding for her athletes.

As the Football Association of Ireland (FAI) continues to defy ministerial demands over governance of the association it was entirely excluded from Thursday’s multi-year investment of €3 million into the re-launched Women in Sport programme.

A total of 41 national governing bodies are listed as receiving funding – with the IRFU on top with €240,000 – the FAI were awarded nothing. In total €3,277,000 was allocated with Weightlifting Ireland receiving €6,000 more than Irish women’s football and Tug of War €20,000 more.

“I think as everybody knows there are a number of issues at present within the FAI in relation to governance which need to be resolved,” said Minister of State for Sport Brendan Griffin.

“Until those issues are resolved we as custodians of the people’s money, and as distributors of that money, need to be extremely careful to ensure it can all be fully accounted for and that there is full confidence amongst the people that the money is being spent appropriately.

“I’ll look forward to a time we are able to provide finance to the FAI again . . . unfortunately at present we are not in a position to do that.”

In a continued ramping up of pressure to conform, Sport Ireland and the State have further indicated they are unafraid to sanction the association. The reiterated message from the Minister was that if his office are unsure of what the money is being used for they will withhold.

The Confederation of Golf in Ireland received a two-year allocation of €200,000 for their Women in Sport programme with Hockey, Swimming, Athletics, Tennis and Gymnastics all taking €150,000.

With no lack of irony an optimistic FAI general manager Noel Mooney said on Wednesday that he hoped “Vera will lead our squad to our first major senior championships and will further the growth of the women’s game here in all areas.” Already that looks a more difficult a task.

Griffin also emphasised that this is the road the FAI has chosen to take. For any reversal to occur it is they who must make changes to their governance policy.

“I’d certainly would have preferred to have seen greater progress by now over the last six months. But we are where we are,” he said.

“I hope that within the upper echelons of the FAI people will realise that if they want financial assistance for current operations, if they want to be part of draw down for capital projects, they are going to have to co-operate with government.

Griffin added that in the current stand-off, movement must first come from the FAI. He also suggested that if there is deemed to be progress there may be a mechanism to allow the FAI back into the Women in Sport funding.

The current allocation is over the years 2019 and 2020. Griffin did not say the FAI are locked out for good. He did emphasis that the state is an enormously important source of funding for the organisation and there are not many others lined up to give such large investments to women’s sport.

“We will always try to facilitate governing bodies when a genuine effort is being made to resolve issues that may arise,” he explained. “What we also know is that there are loads of worthy recipients of funding, and loads who will use the funding we give them and put it to very good use.

“There is no shortage of people looking for funding and who will spend it well and wisely and invest in our communities. That’s why it needs to be realised by those people who are making critical decisions within the FAI.

The Minister finally appealed to those in authority.

“I trust their judgment that they will realise for their organisation support of government is crucial,” he said. “I’d certainly hope they would realise that and they would take the appropriate steps to ensure the relationship with government will improve.”