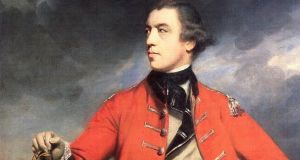 I don’t pretend to understand what F Scott Fitzgerald meant when he said there were “no second acts in American lives”. Whatever it was, John “Gentleman Johnny” Burgoyne would have been technically exempt from the rule anyway, being English.

Even so, Burgoyne’s first career was inextricably linked with the American colonies.

And when the curtain fell on that, 240 years ago, it did indeed look for a time like being his last act, at least in public life. A veteran soldier, he had designed a plan whereby, in the autumn of 1777, he would lead a British invasion force south from Canada, connect with troops marching north from New York, and by isolating New England, end the American rebellion.

Instead, the New York contingent went south, leaving Burgoyne exposed. His surrender in October was the war’s turning point. Gentleman Johnny returned to England, a 55-year-old failure. He would never lead another campaign.

A few years later, however, he did secure the job of British commander-in-chief in Ireland. As which, in 1782, he also became Master of the Royal Hospital Kilmainham, where old soldiers went to fade away. He may have used the time here to develop his other main talent in life.

As early as 1774, he had enjoyed an accidental stage hit with a comedy that started out as a private entertainment, for a wedding. And in 1778, he had been involved with – possibly as co-author – a play called The Camp, officially written by Dubliner Richard Brinsley Sheridan, which satirised the panicked British preparations for a Franco-Hispanic invasion.

But in 1786, the huge success of an anonymously written comedy, The Heiress, forced Burgoyne to out himself as its creator. Later that year, he had another hit with a light opera.

And the stage dominated the remainder of his life. When he died in 1792, it was was noted he had been at the theatre the night before.

Whether he ever lived down being the man who lost America is unclear. One contemporary, Horace Walpole, was in no doubt he would. “Burgoyne’s battles and speeches will be forgotten”, Walpole wrote, “but his delicious comedy The Heiress still continues to delight the stage.”

In an 1808 preface to the play, however, the writer and actor “Mrs Inchbald” reminded people of Burgoyne’s 1777 dispatch from America, explaining his surrender, and commented wryly: “It was correctly written and the style charmed every reader, but he had better have beaten the enemy and mis-spelt every word [...]; for so, probably, the great Duke of Marlborough would have done”.

Of his two careers, she offered the faint praise that he was a man capable of anything “that did not require absolute genius”. He was, she added, “a valiant, but not always a skilful, soldier; an elegant, but sometimes an insipid, writer.”

In any case, an exhibit at the Royal Hospital Kilmainham now gives his soldiery and literature joint billing, although the inscription is juxtaposed with an artefact that also failed in its way.

”Burgoyne’s Bell” was commissioned while he was master. But it was too heavy for the bell tower and now rests, silently, on a basement floor, beside a picture of the Saratoga surrender.

His own first and second acts aside, Gentleman Johnny was to feature posthumously in a third act, courtesy of a later dramatist from Dublin. The play was The Devil’s Disciple, which opened on Broadway 120 years ago (and 120 years after Saratoga) in 1897.

A three-act melodrama set among the American rebels, it climaxes with a trial over which Burgoyne presides. Among other things, this allows him voice a defence of his actions accepted by many historians – that it was the failure of an army superior to order the New York troops north that doomed his plan.

In Shaw’s play, hearing that the second part of the pincer attack has not been launched, he comments sardonically: “Some gentleman in London forgot to dispatch [the orders]; he was leaving town for his holiday, I believe. To avoid upsetting his arrangements, England will lose her American colonies.”

Whatever about rescuing Burgoyne’s reputation, The Devil’s Disciple did wonders for George Bernard Shaw. He had recently turned 40, had a litany of unsuccessful works behind him, and was ruining his health with journalism.

But the play was an enormous success, thereby also removing his objection to a marriage proposal from (the very wealthy) Charlotte Payne-Townshend.

Independently secure, Shaw could now become her husband and not be considered a gold-digger.

They wed in 1898 and his career never looked back.