Seven months after Brexit vote, Britain now has a plan 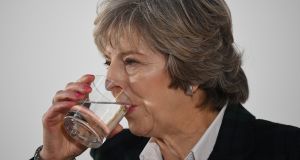 Theresa May: The prime minister pauses during her keynote Brexit speech on Tuesday. May said staying in the single market would keep the UK under the influence of EU law, which would be contrary to the result of the referendum last June. Photograph: EPA/Facundo Arrizabalaga

Theresa May’s unambiguous declaration that Britain will make a clean break with the European Union has brought some welcome clarity ahead of the start of formal talks. By prioritising immigration control, ruling out membership of the single market, and rejecting the key elements of the customs union, the prime minister has removed some important issues from the negotiating table.

There was good news for Ireland, insofar as maintaining the common travel area is one of the prime minister’s 12 stated objectives in the talks. But her commitment to avoiding a return to “the borders of the past” is undermined by a determination to leave the customs union’s common commercial policy and common external tariff.

For most of its history, the Border was a customs rather than security barrier, and customs controls will return in some form if Britain and the EU adopt a different external tariff. May’s official spokeswoman said later that Britain would aim to make such controls as “frictionless” as possible, perhaps through the use of technology.

Britain has an interest in making customs clearance with the rest of the EU as frictionless as possible, not least because many UK-based manufacturers have supply chains stretching across the continent. Even the most unobtrusive customs borders, however, such as that between Sweden and Norway, require clearance of some kind and involve spot-checks on vehicles crossing the frontier.

There are other contradictions within May’s stated objectives, which include creating a “global Britain” by opening the country up to greater trade with the rest of the world. At the same time, the prime minister made clear she wants to reduce immigration from both inside and outside the EU. But reducing immigration significantly would appear unlikely without limiting the numbers of skilled workers and foreign students that a more open Britain requires.

May said she wants Brexit to strengthen “the precious union between the four nations of the United Kingdom”. But two of those entities – Scotland and Northern Ireland – voted against Brexit and Scotland’s first minister, Nicola Sturgeon, said on Tuesday that leaving the single market would make a second independence referendum more likely. 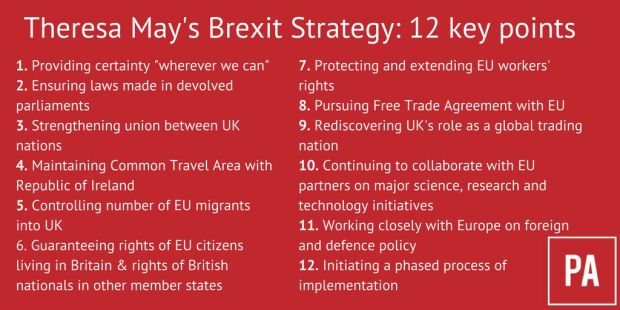 Leaving the single market will make it more difficult for May to achieve her stated ambition of making Britain prosperous, even if she secures a free trade agreement with the EU. According to an assessment by the National Institute for Economic and Social Research, a free trade agreement is likely to lead to national output (GDP) being just over 2 per cent lower each year, even after taking account of reduced budgetary payments to the EU.

May’s priorities reflect current political realities in Britain, and address directly the two greatest concerns of the 52 per cent who voted for Brexit: controlling immigration and escaping from the jurisdiction of the European Court of Justice.

The Labour Party welcomed the speech as evidence that Britain was not heading for a hard Brexit, an interpretation which puzzled many at Westminster. But the response reflects the dilemma the party faces as it attempts to hold onto its support from the majority of its voters who opposed Brexit, without alienating Leave voters in its old industrial heartlands.

May has apparently calculated that the greatest threat to her position comes from the Brexiteers in her own party and their supporters in the media, who will welcome her hardline approach.

Still, her strident language about taking back control of Britain’s laws and having them interpreted solely by British judges could create problems as she seeks to agree a trade deal with the EU. Any such agreement must involve a dispute resolution mechanism, and if the final arbiters don’t sit in Luxembourg, they won’t be in London either.

The prime minister was addressing an audience of foreign diplomats, and she was keen to stress that Britain saw a strong and successful EU as in its own interest. And her acceptance of the need for an “implementation phase” and some continued payment into the EU budget after Brexit helped to reassure financial markets.

But her tone was harsh at times, notably when she warned the EU against seeking to impose a punitive deal on Britain. No deal would be better than a bad deal, she said, an implicit threat to walk away from the talks without an agreement if Britain does not secure access to the same single market it is determined to leave.

Echoing last weekend’s threat from her chancellor, Philip Hammond, May warned that Britain could change its economic model by cutting corporate tax rates and leaving the EU shut out of financial services in the City of London.

Such rhetoric goes down badly in the rest of Europe, where most leaders are clear that leaving the EU must come at a price, and that Britain must not be seen to be rewarded for its decision. And the kind of swagger that is lauded in the British press can sound more like bluster by the time it crosses the channel to Brussels.

Seven months after the referendum, Britain now has a plan. But as Mike Tyson famously observed, everyone has a plan until they get punched in the mouth. Over the next few months, the blows may come not only from the prime minister’s negotiating partners in Brussels, but from the economic consequences of the radical course she has plotted for her country.

1 Ireland could lose out as France lays claim to most of €5bn Brexit compensation fund
2 Ranelagh’s brand new street with three-beds from €1.325m
3 Miriam Lord: The Dáil's answer to John Wayne overcooks the ham slice, by slice, by slice
4 Breakfast in Ballsbridge: When Audrey Hepburn met her dad in Dublin
5 Newton Emerson: Joe Biden’s Brexit remarks show an opportunity for unionism
Real news has value SUBSCRIBE