President of the rich? Emmanuel Macron reboots his leadership

French leader is demonstrating the ability to learn from his mistakes 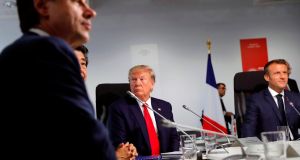 It is a difficult thing for politicians to change. Nearly halfway through his five-year term, in what is widely heralded as Act II of his presidency, Emmanuel Macron is demonstrating the ability to learn from his mistakes.

The second half of 2018 and first half of 2019 were a torturous time for Macron. Key ministers of the environment and the interior resigned on matters of principle. He bungled the handling of the Benalla scandal that broke in July 2018, when it emerged that his bodyguard had beaten up demonstrators.

Then the gilets jaunes or yellow vest protestors launched a six-month-long revolt whose persistence and violence shocked France and the world.

If you lived in the US, you’d know what it’s like to have an arrogant president who doesn’t give a damn

No one is certain the gilets jaunes protests are really over. On July 27th, Macron said: “I do not believe that what created the sincere anger of a part of the population is behind us.”

The epithet “president of the rich” stuck to Macron after he adopted measures intended to stop capital flight from France. Opponents called his sometimes harsh responses to hecklers arrogant. His offhanded treatment of trade unionists, journalists and lower echelons of elected officials alienated many whose goodwill he needed. Macron started out as a man in a hurry. The new Macron aspires to humility and patience, understanding and dialogue, but without fundamentally changing course. Over the past three weeks he has undertaken an all-points diplomatic and domestic charm offensive.

Macron started by inviting President Vladimir Putin to his summer residence on August 19th. Two days later, he spent more than two hours with the Presidential Press Association, and promised more such meetings. On August 23rd he told the youth website Konbini of his conversion to environmentalism, using the word “ecocide” to describe the devastation of the Amazon rainforest.

Just as Macron kept Trump abreast of what he was doing, he also informed the French public. He explained his goals at the beginning of the summit in a televised speech, shone in a press conference with Trump two days later, then detailed his policies in a 40-minute television interview.

Though no one doubts his determination, he approaches the last great reform of his term as cautiously as if it were nitroglycerine

Patti Smith, the godmother of punk rock, might seem an unlikely Macron supporter. But an incident at the Olympia concert hall in Paris on August 26th, the night the G7 closed, gave an inkling of how Macron is admired abroad.

A few members of the audience hissed when Smith praised Macron as “a president who cares about the environment”. As recounted by l’Opinion newspaper, Smith rounded on them, saying: “If you lived in the US, you’d know what it’s like to have an arrogant president who doesn’t give a damn.”

At the G7 summit, Macron quoted Charles de Gaulle, who compared diplomacy to trying to hold a broken window pane together.

Macron’s greatest diplomatic challenge is to save the 2015 Iran nuclear accord. Foreign minister Zarif’s surprise visit to Biarritz was the highlight of the summit. Macron talked with President Hassan Rouhani for two hours on August 31st.

But Macron’s attempts to organise a Trump-Rouhani meeting at the UN General Assembly later this month, and his proposal for a €13.7 billion credit line in return for Tehran resuming compliance with the 2015 accord, hit a snag on September 4th. The Trump administration announced further sanctions. Tehran riposted within hours, saying it would “abandon all commitments” under the agreement.

Domestically, too, Macron is trying to hold the proverbial broken window glass together. Teachers’ unions are furious with the education minister. Personnel in more than half of France’s hospital emergency rooms have been on strike for nearly six months. Doctors and staff in retirement homes also threaten work stoppages. Firemen have been on strike since June 26th. All demand greater means. The Paris transport network RATP and the electricity company EDF have given notice they will strike on September 13th and 19th, respectively.

Macron wants to merge France’s 42 different pension systems into a single, universal regime. Though no one doubts his determination, he approaches the last great reform of his term as cautiously as if it were nitroglycerine.

In mid-August, Macron announced a citizen consultation on pensions, intended to “embody [his] change of method”. He has since advocated basing an individual’s retirement age on the number of years they have worked, rather than prescribing a “pivotal age” of 64. That is the solution favoured by the CFDT, France’s largest and most moderate trade union.

Frédéric Dabi, deputy director of Ifop polling agency, says Macron’s popularity is rising among mid-level employees and workers, because the French economy is improving and taxes are decreasing.

Macron’s approval rating reached 34 per cent in a recent poll, a considerable improvement over last year. At 8.5 per cent, French joblessness is high by international standards, but it is the lowest the country has seen in a decade.

1 Fianna Fáil may have just pressed the pause button on the property market
2 Eating out in Dublin – the homeless way
3 Irish Times poll: Large majority want change of government
4 ‘In Ireland I’ve found another form of persecution’
5 Which jobs do teenage girls and boys aspire to have by age 30?
Real news has value SUBSCRIBE