The professionalisation of aid, and its concentration in a small number of mega-NGOs, has caused its own problems 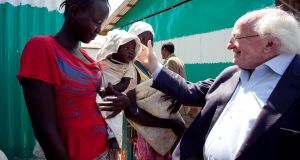 Who knows what the public wants from humanitarian aid agencies? Certainly not the public anyway, judging by the findings of a new survey by Amárach Research. The poll, published last week, found contradictory attitudes towards the charity sector in general. A clear majority (68 per cent) believes charities should get the best professionals possible working for them, it found, yet almost as many (64 per cent) think the majority of work done by these outfits should be done by volunteers. People want the highest standards of governance and professionalism, but just 41 per cent believe charities need to pay competitive wages to get the best people to work for them.

If we were talking about oil companies, none of this would matter. But humanitarian aid agencies depend on public goodwill to survive, so what people think of them matters a great deal. Unfortunately for them, the lesson such research provides is not a terribly helpful one: run your complex, multi-million euro global operations to the highest corporate standards but behave as if you’re plucky start-ups, don’t pay your staff competitive wages – and, ideally, don’t pay yourselves at all.

Those mixed messages are understandable nonetheless. Indeed, the public is only reflecting some of the tensions that charities themselves struggle with. The big Irish aid outfits, most of them founded by idealistic volunteers, have grown into complex organisations with huge budgets, thousands of staff and a global footprint. Their scale demands advanced corporate structures. So do the institutional donors – national governments, mainly – who demand rigorous back-office procedures before releasing their money. But many aid workers are decidedly uncomfortable with the professionalisation of their sector. They know it sits uneasily with public expectations, but, more than that, it jars with their own self-image – one rooted in the idea of humanitarianism as a movement and an ideology, not a vast bureaucracy defined by form-filling and ugly jargon.

But professionalisation happened for a reason. The aid world had high-profile failures in Biafra, Ethiopia and Rwanda – crises that showed the need for more transparency and accountability. There was also a glaring need for better co-ordination and collaboration in the field. As western aid spending rose, vastly larger amounts of money were sloshing through the system, bringing with it a need for more sophisticated structures. The landscape today is unrecognisable from that of 30 years ago. Organised international humanitarianism, once a relatively marginal and specialised activity, is now at the heart of the international system. Since 1990, the combined humanitarian spend of states, UN agencies and NGOs has leapt from just $2.1 billion to more than $30 billion, a figure that doesn’t include local charities or religious groups. A vast sector now encompasses an ever-growing superstructure of oversight agencies, multi-billion dollar NGOs, a cottage industry of monitoring and research outfits – and an increasingly active private sector. Nearly a quarter of US government aid spending in 2016 went to for-profit firms – reflecting the global growth of a private industry geared exclusively to winning government aid contracts.

The professionalisation of aid has created a flawed system hobbled by bureaucracy and beset by turf wars. But, as the aftermath of the 2004 tsunami and the 2010 Haitian earthquake showed, it has also fashioned a structure capable of quickly mobilising massive resources in response the world’s worst crises. The public has may have outdated ideas about how aid works, but if humanitarian agencies are to retain their relevance they must first reconcile themselves with the new landscape.

1 ‘I wandered around Dublin wondering: Is this what they call a capital city?’
2 Funeral of John Hume hears peacemaker ‘gave dignity and life to so many people’
3 Irish in Canary Islands: Life has changed dramatically
4 Fresh investigation into the murder of Michaela McAreavey in Mauritius
5 NPHET calls for ban on non-essential travel from countries with high Covid-19 rates
Real news has value SUBSCRIBE