How the UK killed Euroscepticism across Europe 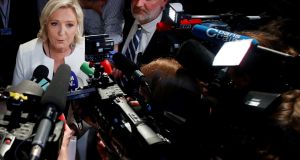 Its gains may have been more modest than expected in the European elections last week, and liberal optimists believe its support may have peaked. But there’s no doubt, taking a longer view, that the advance of the far-right over the past decade is the biggest shock to continental politics since the war. Assuming its influence has been contained looks like wishful thinking. Populist radical-right parties are in power in some of Europe’s biggest states. Neo-Nazi outfits are pushing for parliamentary majorities in others, and, across the EU, the mainstream centre-right is embracing the nativist agenda. They may differ on key issues, and their ability to form a coherent block may be limited by those differences, but the overall number of far-right MEPs once again rose significantly.

Given that success, toning down the message would seem like a counter-intuitive thing for the radical right to do. Yet in one important respect, and in some cases quite subtly, that’s exactly what it did in the weeks and months leading up to the election.

Five years ago, a core theme of every right-wing populist manifesto was withdrawal from the EU

Five years ago, a core theme of every right-wing populist manifesto was withdrawal from the European Union. Marine Le Pen, the leader of France’s Rassemblement National (formerly the Front National), campaigned on the idea of abandoning the euro and called for “Frexit” at her rallies as recently as 2017. A few years ago, members of Alternative für Deutschland (AfD) voted to include a “Dexit” proposal in its election manifesto. The idea was embraced by the populist right in Italy, Hungary, the Netherlands and across Scandinavia. Getting out of the EU seemed to be one of the main political demands of these parties.

And then, quite suddenly, nearly all of them dropped the idea. Having originally planned to fight the European election on the theme of leaving the EU, Germany’s AfD watered down the proposal in January, and on the eve of the election last month its co-president Alice Weidel remarked that the “Dexit” talk had “clearly weakened” the party. Le Pen still blames the EU for many of France’s ills, but in her party’s latest manifesto both “Frexit” and the idea of scrapping the euro were shelved. “The French people have shown that they remain attached to the single currency,” the document states.

In opposition, Italy’s far-right Lega party made hostility to the EU its USP. Party leader Matteo Salvini held rallies wearing T-shirts that read: “Enough with the Euro”. In the past year, the party has struck a far more pragmatic note. Like Le Pen, Salvini now speaks of finding “common sense” solutions inside the EU. “We don’t want to leave anything; we want to change the rules of the EU from the inside,” he said in December.

The pattern repeats itself across the continent. The Sweden Democrats abandoned its EU exit policy in January. The True Finns party has dropped its call for a referendum on Finland’s membership. In Hungary, the extreme-right Jobbik party, which publicly burned the EU flag a few years ago, no longer calls for withdrawal.

The most obvious reason for the large-scale shift in policy is Brexit. The UK’s attempt to extricate itself from the EU has been such a debacle that the idea of withdrawal has become toxic even for the continent’s biggest headbangers. It’s difficult to sell “Frexit” as a means of retrieving French greatness and grandeur when everyone can look at the horror show across the English channel and see that, in practice, it seems to mean national humiliation, political stasis and long-term decline.

Listen to the words the populists use to explain their u-turn: they speak about withdrawal being “unrealistic” (True Finns), “not feasible” (Lega) and “premature” (Denmark’s People’s Party). In other words, public opinion is against it. Surveys show that, across the bloc, support for EU membership is at its highest levels in decades. Some 61 per cent of Europeans believe membership is “a good thing” according to a Eurobarometre poll in March.

Le Pen, Salvini and their allies have not become Euro-federalists. Some of the policies the populist right has adopted instead of an outright call for withdrawal – a “Europe of nations”, for example, or repudiation of EU treaties – are either deliberately vague or would in effect mean the end of the EU as we know it anyway. But it’s telling that they feel compelled to moderate their language. Three years after the UK’s referendum, Brexit looks less like a harbinger of the EU’s disintegration than a cautionary tale for the rest of the continent.