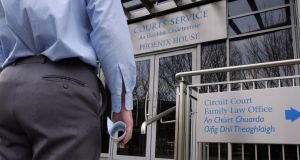 Family law office at Smithfield: In many courts, privacy is very limited, with all litigants and witnesses milling around in large open areas. Photograph: Cyril Byrne

In a courthouse in the west of Ireland people are sitting on the stairs and standing in the small passage-way outside the court room discussing confidential family matters with their lawyers.

In middle of this chaos, Tusla – the Child and Family Agency – is making an application to keep an infant in care. It’s one of a number of family law case listed, which normally includes applications relating to maintenance, access to children and, sometimes, domestic violence.

On another day in another court, there are 139 cases on a general list that included crime, general civil law and private family law. Four are childcare cases. The first of these is not heard until the middle of the afternoon, but the families concerned, the social worker witnesses attending on behalf of the Child and Family Agency and all the lawyers involved had to be present all day as they did not know when their cases would be called.

These are extreme illustrations of the difficulties faced by the District Court, which is the court with jurisdiction to hear supervision and care order applications from the Child and Family Agency.

According to the 2017 annual report of the Courts Service, the latest available, there were 11,931 such applications that year, up from 9,964 the previous year. These applications included a large number of renewals and reviews of existing orders.

Late last year, the Child Care Law Reporting Project decided to conduct a survey of all the districts in the District Court jurisdiction in order to get an overview of the conditions in which childcare cases are heard.

It attended sittings in 35 court venues, covering each of the 24 districts, between October 2018 and January 2019. Its reporters saw a wide variation in the physical conditions of the courts, the facilities available to parties and witnesses, the volumes of cases dealt with and the manner in which lists were conducted.

Where childcare cases were part of either a mixed list or a family law list, some courts listed them at the beginning or end of the list, while in others they were interspersed throughout the day. This means that the families, witnesses and lawyers can spend a whole day waiting for their case to be called. In many courts, privacy is often very limited, with all litigants and witnesses milling around in large open areas outside the courtrooms, often discussing their cases there with their lawyers, a situation exacerbated when family law and childcare take place on the same day as crime and civil matters.

Families, witnesses and lawyers can spend a whole day waiting for their case to be called

Physical conditions in the different courts also varied widely. In only a minority of courthouses were there separate areas where family law is dealt with, along with an adequate number of consulting rooms. In some of the smaller courts, there was no waiting area at all, and litigants, along with their lawyers, have to wait in cramped hallways, sit on stairs, stand outside the court regardless of the weather, or wait in nearby hotels. Basic comforts, like water dispensers and vending machines for beverages and snacks, were the exception rather than the rule. In a few courts, the acoustics were poor.

While many applications, especially where renewals of existing orders are concerned, are fairly routine, they always involve sensitive issues within a vulnerable family, with the possible outcome of removing a child from its family. Such a decision cannot be compared to convicting a person for assault, imposing a traffic fine or deciding on a boundary dispute between neighbours, the usual fare of the District Court.

Yet in a quarter of the courts attended by the reporting project , the childcare cases were heard alongside such usual cases. In half of them, childcare was included in a family law list. This does not mean the list is significantly shorter – one family law list had 126 cases on it, of which six were childcare. Only nine districts, including Dublin and other major cities, had special days dedicated to childcare.

This demonstrates the fact that the existing structure of our courts is unsuitable for family law in general and childcare law in particular. There are 24 districts under the District Court jurisdiction, with approximately 80 court venues. Under the legislation governing the District Court, people involved in cases before it must reside in the district covered by it.

The districts were drawn up a century ago, and the burdens of the various court districts bear little relationship to the populations that now occupy them. Those in commuter areas, for example, now hear volumes of cases, and types of cases, that would have been unknown even two decades ago, leading to overcrowded lists and overworked judges.

Many, if not all, of these issues could be addressed by the establishment of a separate family division of the courts, with specialist judges hearing all family law, and child care listed separately. But there is little sign of legislation for such a court, despite repeated promises by successive governments. The Oireachtas Committee on Justice and Equality has been discussing the reform of family law in recent weeks, and heard virtually unanimous calls for such a court from all those who made presentations. When might these calls be heard?