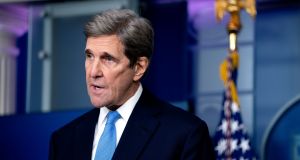 John Kerry, US special presidential envoy on climate. “The stakes on climate change just simply couldn’t be any higher than they are right now.” Photograph: EPA/Stefani Reynolds/Pool

US special presidential envoy on climate John Kerry warned that the Paris climate accord is “not enough” to tackle climate change, as he made his first public appearance at the White House since his appointment on Wednesday.

Announcing a summit of world leaders to take place on April 22nd, he said that a global response was needed to respond to the climate crisis.

“The stakes on climate change just simply couldn’t be any higher than they are right now,” he said. “This is an issue where failure, literally, is not an option.”

The US, the world’s second largest carbon emitter after China, will announce how it plans to reach specific targets as set out in the Paris climate agreement by the time the summit convenes, Mr Kerry said.

The Biden administration rejoined the global accord last week after former president Donald Trump withdrew the US from it.

Mr Kerry was accompanied at the White House press conference by Gina McCarthy, the top adviser on domestic climate policy, who pledged to deliver “good paying union jobs” in the field of clean energy, as America prepares to adapt its manufacturing capability to environmentally-friendly production.

Outlining her own political experience in a state which has seen the traditional car industry suffer, she said that future prosperity depended on developing cleaner technology, such as electric vehicles.

But several Republican senators took issue with the Biden administration’s clampdown on fossil fuels, indicating the battle ahead for Mr Biden as he looks to achieve legislative change on energy policy in Congress.

Meanwhile Linda Thomas-Greenfield appeared before a key congressional committee on Wednesday following her nomination as ambassador to the United Nations. The career diplomat has come under heavy fire for a speech she made in 2019 at a Confucius Institute in Georgia, with Republican senator Ted Cruz alleging that she sounded admiring of China in the speech.

Ms Thomas-Greenfield said on Wednesday that the speech was a “huge mistake”, and said that she would hold China to account at the UN.

Separately, secretary of state Antony Blinken became the latest Biden nominee to be sworn in, with vice-president Kamala Harris administering the oath of office to the 52-year-old foreign policy veteran.

In a speech to state department staff Mr Blinken pledged to rebuild “morale and trust” at the department.

In his first official press conference, Mr Blinken indicated that he would reverse many of the polices of his predecessor, Mike Pompeo, in particularly reversing the designation of Yemen’s Houthis as a terrorist group.

“We’re taking a very urgent and very close look” at the situation in Yemen, he said, describing it as the “worst humanitarian crisis in the world today”.

On Russia, Mr Blinken warned the Kremlin about its treatment of opposition figure Alexei Navalny. “It remains striking how concerned and even scared the Russian government seems to be of one man – Mr Navalny,” he said.

Meanwhile, the department of homeland security issued a warning to the public on Wednesday about the growing risks of attacks by “ideologically-motivated violent extremists”.

In an unusual move the department singled out the risk posed by domestic actors, arguing that the January 6th attack on the US Capitol may have emboldened extremists.

While the department said it had no information about specific threats, “we remain concerned that individuals frustrated with the exercise of governmental authority and the presidential transition, as well as other perceived grievances and ideological causes fuelled by false narratives, could continue to mobilise a broad range of ideologically-motivated actors to incite or commit violence”.