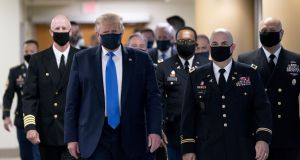 Former special counsel Robert Mueller broke his long silence at the weekend to defend his prosecution of Roger Stone, forcefully rebutting US president Donald Trump’s claims the investigation into Russian interference in the 2016 election was political and illegitimate.

Speaking after Mr Trump commuted his long-term aide’s prison sentence for obstructing an inquiry into Russia’s role in the campaign, Mr Mueller said Mr Stone was no innocent victim and emphasised that the president’s clemency grant did not erase the conviction on seven felony counts.

“Stone was prosecuted and convicted because he committed federal crimes,” he wrote in an op-ed in the Washington Post. “He remains a convicted felon, and rightly so.” Mr Mueller seemed most aggrieved over the president’s assertions of bad faith on the part of those who prosecuted Stone and others affiliated with Mr Trump.

“We made every decision in Stone’s case, as in all our cases, based solely on the facts and the law and in accordance with the rule of law,” Mr Mueller wrote. “The women and men who conducted these investigations and prosecutions acted with the highest integrity. Claims to the contrary are false.”

The article was remarkable in that it was the first time he had offered an extended defence of his two-year investigation after an endless barrage of attacks by Mr Trump, who refers to it as a “hoax” and a “witch hunt”.

Mueller’s investigation concluded Russia had mounted an extensive effort to interfere in the 2016 election with the purpose of helping Trump. While it did not establish a criminal conspiracy between Trump’s campaign and Russia, it did outline numerous contacts between them and said the campaign had known it was benefiting from Moscow’s help.

Calling the move an act of “staggering corruption”, House of Representatives speaker Nancy Pelosi, said she would pursue legislation to prevent the president from using his power to protect those convicted of a cover-up on his own behalf, although that would face serious constitutional hurdles and never be signed into law by Trump.

Trump’s action was criticised by some Republican critics of the president, who called it an abuse of power intended to subvert justice. “Unprecedented, historic corruption: an American president commutes the sentence of a person convicted by a jury of lying to shield that very president,” Sen. Mitt Romney of Utah wrote on Twitter.

Senator Patrick Toomey of Pennsylvania noted Stone was “duly convicted” of obstructing a Republican-led congressional inquiry. “While I understand the frustration with the badly flawed Russia-collusion investigation, in my view, commuting Roger Stone’s sentence is a mistake,” he said.

Meanwhile Mr Trump wore a mask during a visit to Walter Reed National Medical Center outside Washington, the first time he has done so in public since the start of the outbreak.

Covid-19 cases continued to rise over the weekend as the state of Florida reported a record increase of more than 15,000 new cases in 24 hours on Sunday, as the Trump administration renewed its push for schools to reopen and anti-mask protests were planned in Michigan and Missouri.

If Florida were a country, it would rank fourth in the world for the most new cases in a day behind the US, Brazil and India, Reuters reported.

Florida’s daily increases in cases had already surpassed the highest daily tally reported by any European country during the height of the pandemic there. It has also broken New York state’s record of 12,847 new cases on April 10th when it was the epicentre of the US outbreak. – New York Times