Book discussing leadership and decision-making due for publication next year 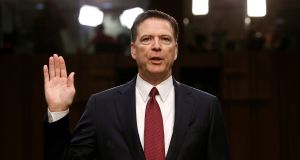 Former FBI director James Comey: book will feature stories of the agency’s investigation into the use of a private email server by Hillary Clinton while in office. Photograph: Jonathan Ernst/Reuters

James Comey, the former director of the FBI who was sacked by US president Donald Trump in May, has signed a deal for a book, ostensibly on leadership and decision-making, that is scheduled to come out in spring next year.

The deal, worth $2 million (€1.68 million), is with Flatiron Books of New York, a division of publishers Macmillan.

According to the publisher, the book, which has yet to be given a title, will discuss “what good, ethical leadership looks like and how it drives sound decisions”.

As well as insights into Mr Comey’s interactions with the president, the book will feature stories of the FBI’s investigation into the use of a private email server by Hillary Clinton, the Democrat candidate, during her 2016 campaign for the presidency.

Mr Comey’s announcement in late October last year, shortly before the November election, that the bureau was reopening the investigation into the Mrs Clinton’s emails led to Democrat allegations that he was unfairly influencing the outcome.

Mr Comey announced just two days before the election that the FBI was closing the investigation and that no charges would be recommended.

Appointed by president Barack Obama, Mr Comey was FBI chief from 2013 to 2017. He had formerly been deputy attorney-general during the administration of president George W Bush.

While at the department of justice, he joined a group who threatened to resign over plans – subsequently revised – for a domestic surveillance programme following the terrorist attacks of September 2001.

Since his removal from the FBI directorship, Mr Comey has testified before the US Congress that Mr Trump asked him to end an investigation into Michael Flynn, Mr Trump’s former national security adviser. Mr Comey said he had kept memos about his meetings with the president.

“Throughout his career, James Comey has had to face one difficult decision after another as he has served the leaders of our country,” said Bob Miller, the head of Flatiron Books, announcing the deal.

“His book promises to take us inside those extraordinary moments in our history,” Mr Miller continued, and “will give us unprecedented entry into the corridors of power”.

Christopher Wray, Mr Comey’s replacement at the FBI, was confirmed by the senate on Wednesday.

An investigation into alleged Russian ties to the Trump campaign continues, now under the leadership of Robert Mueller, a justice department-appointed special counsel. – (Copyright The Financial Times Limited 2017)