Kamala Harris has hit out at US president Donald Trump's record on Covid-19 as she made her first joint appearance with Joe Biden after being named as the former US vice-president's running mate in the 2020 election. Video: Reuters 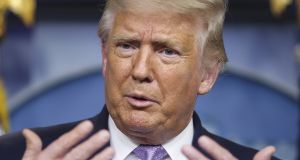 US President Donald Trump intensified his attacks on vice presidential nominee Kamala Harris on Thursday, as he appeared to give credence to so-called “birther” theories suggesting she cannot be vice president because of her heritage.

Mr Trump – who was a leading proponent of conspiracy theories about former president Barack Obama’s place of birth – was asked about the theory at a press briefing in the White House.

Ms Trump’s comments come on the back of a widely-circulated opinion piece by conservative law academic John Eastman in Newsweek magazine. The article questions whether Ms Harris is eligible to become vice president or president under the US constitution, claiming that neither her father or mother was a naturalised US citizen at the time of her birth in 1964.

The article argues that, before voters “so cavalierly accept senator Harris’ eligibility” questions should be posed “about the status of her parents at the time of her birth.”

Ms Harris’ mother was a cancer researcher who emigrated from India while her father emigrated to the United States from Jamaica.

Speculation and conspiracy theories about Ms Harris, who was born in Oakland, California, have surfaced on rightwing social media channels since she was named as former vice president Joe Biden’s running mate on Tuesday. The issue recalls the false “birther” conspiracy theory adopted by Trump and others suggesting that Barack Obama, whose father was Kenyan, was not born in the United States, and calling on the president to release his birth certificate.

During the briefing Mr Trump also rowed back on earlier remarks he made in a Fox News interview in which he suggested that his recent threats to cut funding for the postal service was linked to efforts to suppress mail-in votes.

“They need that money in order to make the post office work, so it can take all of these millions and millions of ballots,” he said. “If we don’t make a deal, that means they don’t get the money. That means they can’t have universal mail-in voting, they just can’t have it.”

Asked about his comments later, Mr Trump denied that this was his intention. But he repeated unfounded accusations about the reliability of the mail-in voting system, warning that November’s election “will end up being fraudulent” if mail-in voting goes ahead.

Mr Trump also hit out at his presidential rival Joe Biden’s suggestion earlier in the day that a national mask-wearing mandate should be introduced.

Speaking after he was briefed with Ms Harris by public health officials about coronavirus, Mr Biden had said that “every single American should be wearing a mask when they’re outside for the next three months, at a minimum.”

“It’s not about your rights,” he said. “It’s about your responsibilities as an American.” “Be a patriot. Protect your fellow citizens…Do the right thing.”

But Mr Trump took Mr Biden to task for suggesting a national mandate, stating that it fell to individual states to make rules around mask-wearing. He again hinted that perhaps face-coverings were not a successful mode of protection against Covid-19.

Coronavirus infections continue to spread in the United States, with 163,000 deaths now reported. Almost 1,500 deaths were registered on Wednesday alone – the highest single-day total in August.

The Biden campaign is expected to focus heavily on Mr Trump’s handling of the coronavirus pandemic in the coming weeks as the US presidential campaign heats up.

Ms Harris highlighted Mr Trump’s handling of the virus in her debut speech as the vice presidential nominee on Wednesday.

“The president’s mismanagement of the pandemic has plunged us into the worst economic crisis since the Great Depression,” she said, noting that an American dies of Covid-19 every 80 seconds