Taoiseach will meet US president in White House 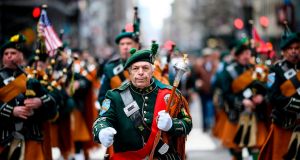 The St Patrick’s Day parade in New York City and the shamrock cermemony in the White House have been cancelled because of the coronavirus outbreak.

New York Governor Andrew Cuomo announced on Wednesday night that the centuries-old parade would not go ahead after parades in Chicago and Boston were also called off.

Organisers plan to hold what would have been the 259th annual New York parade at a later date, Mr Cuomo said in a statement late on Wednesday. It is the first time the New York parade has been cancelled in its history.

The March 17th event attracts millions of spectators including Irish-Americans who line up along Manhattan’s Fifth Avenue to celebrate Ireland’s national day. Parades in Ireland were cancelled earlier this week because of the coronavirus outbreak.

NEWS: The organizers of the St. Patrick’s Day Parade in NYC have agreed to postpone the parade given the evolving #Coronavirus situation.

I thank the parade's leadership for working cooperatively w/ us.

We believe postponing the parade is in the best interest of public health.

“While I know the parade organisers did not make this decision lightly, public health experts agree that one of the most effective ways to contain the spread of the virus is to limit large gatherings and close contacts, and I applaud the parade’s leadership for working cooperatively with us,” Mr Cuomo’s statement said.

The news came shortly after US President Donald Trump announced a month-long ban on travel to the United States from European countries besides Ireland and the United Kingdom and America’s National Basketball Association said it was suspending the rest of the season after a player tested positive.

The annual St Patrick’s reception at the White House was cancelled also. The move became apparent late on Wednesday when it was not included on US President Donald Trump’s daily schedule for Thursday.

The White House reception includes a shamrock ceremony and takes place every year ahead of St Patrick’s Day.

Taoiseach Leo Varadkar will meet Mr Trump on Thursday morning in the oval office. He addressed the Ireland Funds dinner on Wednesday night in Washington having arrived in the US a day later than planned as the Government dealt with Covid-19 in Ireland.