New Ukip leader: ‘I absolutely abhor the rhetoric that says we are at war with Islam’ 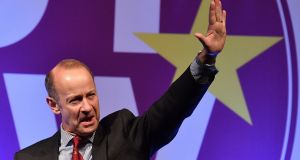 The cheer that went up around the Riviera conference centre when Henry Bolton was announced as Ukip’s new leader on Friday was as much an expression of relief as of celebration. A former policeman and soldier, Bolton is unknown outside his party and obscure within it.

Many of the activists hugging one another after the declaration were celebrating the defeat of Dublin-born Anne Marie Waters, the bookies’ favourite who was beaten into second place. Waters stayed away from the conference until a few minutes before the results of the leadership election were announced.

She swept into the press centre at the head of a small entourage and surrounded by cameras, every inch the victor in waiting. She brushed aside the suggestion of mass resignations if she won, in protest against her focus on Islam, a religion she has described as evil, and rejected the charge that her views were extreme.

“Well, they’re not used to hearing the truth, it’s as simple as that. The truth sounds extreme when it’s been pushed out of the arena for such a long time,” she said.

Waters has a long-standing association with Tommy Robinson, a former leader of the extreme-right English Defence League and, apparently confident of victory, she suggested that he could join Ukip in future.

“He has no interest in joining the party. But it would depend on the members. I’ve no intention of lifting the current ban. But there can be, I think, discretion, if the members agree to it. But as I say, he’s got no interest,” she said.

Then she swept out again to await the leadership declaration, obliged to sit through a lengthy video about the Icelandic fishing industry before hearing the news. The votes for each candidate were announced in ascending order and the cheering in the hall began when Waters was named as the runner-up with 21 per cent of the vote, compared to Bolton’s 29 per cent.

In a press conference later, the new leader left no doubt that Ukip’s choice was not only an endorsement of him but a rejection of Waters’s campaign against Islam.

“There is an issue to be discussed and we need to do that in partnership with the Muslim community of Britain. We don’t need to be confronting anyone, I absolutely abhor the rhetoric that says we are at war with Islam or anything that indicates as such,” he said.

Bolton said it was for Waters to decide if she wished to remain in Ukip but he agreed that, by not electing her, it had avoided becoming the “UK Nazi party”.

“Absolutely, I think the party has today voted for a leader who has been very open about what he feels is the way forward,” he said.

Outside, the vanquished warrior was nowhere to be seen but among the relieved delegates were a few who felt let down. Cathy Carey, who had the words “Patriotism is not Racism” emblazoned on her T-shirt, thought Ukip had missed an opportunity.

“I think she’s prepared to expose a lot more of the corrupted truth. Islam is a major, major thing. But it’s not just Islam, it’s the Left, the totalitarian fascist regime that they have become in our country, what Europe has become – it’s a fascist regime. And the Nazism that Islam is is staring us in the face,” she said.

“I’m sick of being called a racist and a Nazi. They are the Nazis. They’re here to conquer. They are invading by mass immigration.”

Liz Phillips said she never believed that Ukip members would choose Waters and she felt certain that Bolton was the right choice.

“I’ve known Henry Bolton for a long time and he really is a leader of men and he will lead this party. He will unite the party,” she said.

Ian Walsh thought Ukip had dodged a bullet in rejecting Waters, arguing that, after Theresa May’s speech in Florence last week, the party should focus on holding her to account over Brexit. “Up until she made that speech, I believed she would do the right thing. Now I believe that it’s Ukip’s job to make sure that she does do the right thing.”