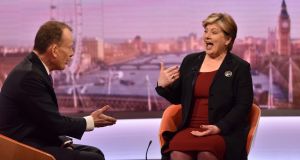 British Labour Party MPs hoping to take over the party leadership will make their final behind-the-scenes pitches to colleagues for their support ahead of nominations closing on Monday.

Last-minute phone calls, messages and meetings will be held as contenders to replace Jeremy Corbyn as leader, and Tom Watson as deputy, rally MPs and MEPs to try to reach the threshold of 22 nominations to get through to the next round.

Those who hit the threshold last week, including the shadow Brexit secretary, Keir Starmer, Jess Phillips, Lisa Nandy and Rebecca Long-Bailey, will still be trying to boost their support base as their leadership bids continue.

Emily Thornberry, the shadow foreign secretary, who has struggled to gain support after being the first person to declare she was running for leader told the BBC she was confident she would reach the threshold by the time nominations close on Monday at 2.30pm.

Clive Lewis, the shadow treasury minister, was on just four nominations – including the nomination he gave himself – with just 24 hours before the cut-off.

Angela Rayner’s runaway success in support from colleagues for the deputy position has put her on 72 nominations. Labour’s sole MP in Scotland, Ian Murray, is also through to the next round by getting the backing of 30 MPs and MEPs.

MPs will be keen to see whether the most left-wing candidate, Richard Burgon, can get through to the next stage for deputy leader. He was on 18 nominations and said if he reached 22 he would ask people to back another candidate so that members have the widest possible choice on the eventual ballot paper.

Rosena Allin-Khan, who had the support of 17 people and Dawn Butler, who had 15, will be among those hoping that a last-minute surge in declarations will go in their favour.

Nandy, the MP for Wigan whose pitch for leader is strongly about reconnecting the party with its heartland voters, will make her first speech in the campaign on Monday in Dagenham, east London.

The area voted 62 per cent leave in the European Union referendum and saw a swing to the Conservatives in the 2019 general election, although Labour retained the seat. She will be joined by the local MP Jon Cruddas.

In her pitch for the leadership Long-Bailey has said she wants to abolish the House of Lords and would not stand in the way of another Scottish independence referendum.

The shadow business secretary, who is a close ally of Corbyn, said having “completely unelected people” within the structure of government was wrong and representative of the “Westminster bubble”.

She remains behind Starmer in early polling of members over Corbyn’s replacement.

She told the Sky News programme Sophy Ridge on Sunday: “I do want to abolish the House of Lords and we’ll be rolling out as my campaign progresses how we intend to really shake up that constitutional package.

On how the work of MPs would be scrutinised with no upper chamber, she said: “There would need to be checks and balances in place but to have a set of completely unelected people doing that I don’t think is right. We need to have people who are able, experts and democratically accountable to the community that they represent, not people appointed by parties.”

Long-Bailey, who has positioned herself as the most left-wing of the leadership candidates, also said she could support a second referendum on Scottish independence if she was ever elected prime minister, despite wanting to retain the union.

She said: “I wouldn’t want to inhibit the democracy of people because that’s one of the most fundamental pillars that we’re proud of in this country, but I don’t support in any way the breaking up of Scotland from the UK.

“I’m fully committed to the union and I don’t think that should be shaken in any way, but ultimately the people of Scotland need to make the case and they’ve got their own parliament to determine whether they want to push that and that will be for me as a prime minister to review and to look at.”

References to her being the “continuity Corbyn candidate” in the race, were “annoying”, she said, but she agreed she was a socialist.

“It annoys me when people say that and unfortunately, as a woman, it annoys me even more. I’m a person in my own right,” she said.

On running an effective joint ticket with Angela Rayner, who is standing to be deputy leader of the party, she said: “We always joked, to be honest, that the pair of us, that if it ever goes wrong, ‘You know it’s going to be me and you that’s going to have to sort it out?’ And then when we had the defeat and it was devastating.

“We both sat down and was like: ‘You know, we were joking; you know, we actually are going to think about this.”

Thornberry, who was once one of the most prominent people in Corbyn’s team and deputised for him at prime minister’s questions, has so far struggled to get support for her bid.

She told the BBC’s The Andrew Marr show: “From the conversations I’ve had this weekend I’m fairly confident that so long as I don’t get any slippage, I’ll be fine. I’ll get across the line and then we move on to the next stage.

“I’ve been a slow starter but I did start from a standing start after the general election.”

The former barrister, who backed remaining in the EU and a second referendum, said she could withstand the ups and downs of the leadership contest as she comes from a long line of “tough old birds”. – Guardian