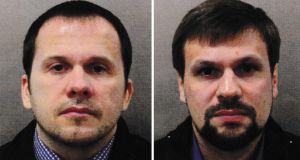 The real identity of one of the men wanted by Britain for the Salisbury nerve agent attack on former Russian spy Sergei Skripal and his daughter is Anatoliy Vladimirovich Chepiga, according to media reports on Wednesday which said he was a decorated Russian colonel.

Earlier this month, British prosecutors charged two Russians – Alexander Petrov and Ruslan Boshirov – with attempted murder for the Novichok poisoning of the Skripals in March. But they believed the suspects had been using aliases to enter Britain.

The Daily Telegraph and the BBC said Boshirov’s real name was Chepiga, citing investigative reporting by Bellingcat, a website which covers intelligence matters. Two European security sources familiar with the Skripal investigation said the details were accurate. While the two men have said they were merely tourists the British government knows their actual identities, sources close to the investigation have said.

Russia denies any involvement in the poisoning. But the Telegraph reported that Chepiga (39) had served in Chechnya and Ukraine. Moreover, he was made a Hero of the Russian Federation by decree of President Vladimir Putin in 2014.

Following the reports British prime minister Theresa May attacked Russia for its “desperate fabrication” over the Salisbury spy poisoning as she addressed world leaders in New York.

Britain has set out detailed evidence about the suspects while Russia has sought only to “obfuscate”, said the prime minister.

“We have taken appropriate action, with our allies, and we will continue to take the necessary steps to ensure our collective security. Russia has only sought to obfuscate through desperate fabrication,” she told the United Nations Security Council.

The two were identified by the UK as members of the GRU, Russia’s military intelligence service.

“We cannot let the framework be undermined today by those who reject the values and disregard the rules that have kept us safe. It will take collective engagement to reinforce it in the face of today’s challenges. And in this, as has always been the case, the UK will play a leading role,” she said. – Reuters/PA