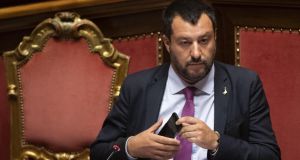 Milan prosecutors have opened a corruption investigation into Italy’s far-right League party over allegations that it received funds from Moscow ahead of May’s European elections.

The investigation came to light on Thursday, a day after the website Buzzfeed reported that a close aid to Matteo Salvini, Italy’s deputy prime minister and leader of the League, held talks with Russian businessmen soliciting financing worth more than €1 billion.

Buzzfeed said it had obtained an audio recording of the meeting earlier this week.

The meeting allegedly took place at the Metropol hotel in Moscow in October last year when Mr Salvini was visiting the Russian capital, although there is no suggestion that the deputy prime minister was present.

Under the reported arrangement, fuel was to be sold at a discount to an Italian oil firm by a Russian oil company, through intermediaries. The difference, reported by Buzzfeed to be worth an estimated $65 million based on fuel prices at the time, was allegedly to be diverted to the League.

Earlier this year, Italian magazine L’Espresso reported alleged links between Moscow and Mr Salvini’s entourage and suggested that money could have been secretly funnelled into the far-right party’s finances.

According to some extracts of the recording, the meeting was organised “to negotiate the terms of an agreement to send millions of dollars from Russian oil to Salvini’s party, through a secret channel”.

Mr Salvini has denied the accusations. “I have never taken a rouble, a euro, a dollar or a litre of vodka in funding from Russia, ” he said in statement on Wednesday.

On Thursday he repeated: “We have had zero Russian funds, it’s clear that we are treading on someone’s toes.”

Responding to the Buzzfeed report, Mr Salvini said “I have already sued for libel in the past, I’ll do so again today, tomorrow and the day after tomorrow.”

The League’s alleged emissary Gianluca Savoini confirmed he was at the taped meeting but denied any wrongdoing.

“There was never any discussion or any deal. I have never received any money. This tour involved a large public meeting between businessmen and it was normal to have talks among private individuals. I have never done anything illegal and I am free to meet whoever I want, if they are not criminals,” he said on Wednesday.

Mr Savoini, who is married to a Russian and has been dubbed Mr Salvini’s “sherpa to Russia” in Italian media reports, uses a photograph of himself with Vladimir Putin as his WhatsApp avatar.

The investigation into alleged Russian funding could trigger fresh tensions between the League and its coalition partner, the anti-establishment Five Star Movement.

We are “worried about what happened. We don’t have to underestimate the opening of the probe” a Five Star Movement source said. “We want transparency. No shadows on this government,” they added.

Fabio De Pasquale, who is leading the investigation, is one of the most prominent Italian prosecutors, having led cases against public corruption in the 1990s, against Silvio Berlusconi, the former prime minister, and against Eni, the Italian oil and gas company, over alleged corruption in Nigeria. – Copyright The Financial Times Limited 2019

1 Miriam Lord: Minister for Agriculture tries to get himself out of the manure
2 Coronavirus: One more death and 24 new cases reported in the Republic
3 Taoiseach rules out united Ireland referendum as ‘divisive’
4 Martin criticises ‘over-focus’ on Border poll ahead of Foster meeting
5 Barry Cowen tells Dáil he is profoundly sorry for ‘stupid’ drink-driving offence
Real news has value SUBSCRIBE