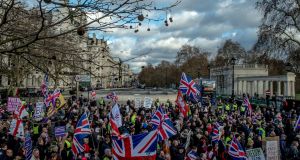 Demonstrators march to vent their frustrations over Britain’s inability to agree on a plan to leave the European Union, in London. Photograph: Andrew Testa/The New York Times

Significant preparation would be needed ahead of a Border poll on Irish unity, if one were to take place at some stage after Brexit, according to a new Government document, pointing to the UK Brexit referendum as an example of the danger when this does not happen.

The final version of the 2019 Government risk register issues a clear warning about the risks of a return to violence in Northern Ireland after a no-deal Brexit and the potential damage to community relations there . It also outlines the significant economic and political risks for the Republic, warning that exceptional measures would be needed to save jobs

The draft version of the risks register –which outlines a range of economic, political and social risks facing the country – was published earlier this year and interest groups have subsequently fed in their observations. The revised version of the register, published on Monday, includes new warnings about the risks of paramilitary violence in Northern Ireland after Brexit.

Following submissions in the consultation process querying the Border poll issue, the document says that it is not for the risk register to deal in detail with the “very important and sensitive policy issues “raised by this. However, it says that the Government “ has always recognised the need for advance preparations for referenda and this would be of particular importance in the case of a Border poll given the potential impact on all the people of the island of Ireland”. It adds that “the lessons of the UK Brexit Referendum are of particular resonance in this context.”

With a no-deal Brexit now appearing a greater threat, following the election of Boris Johnson as Conservative leader, the register warns that “uncertainty around a physical border on the island could also be expected to become a focus for dissident republican paramilitary recruitment and activity”. Garda and PSNI authorities have said publicly that any border infrastructure or personnel would become targets for dissident republican paramilitaries and require police or other protection, it says,

“A no-deal Brexit also has the potential to become a focus for increased loyalist paramilitary recruitment and activity, including in response to dissident republican paramilitary actions and an increased public focus on a Border poll, “ the register warns. It emphasises that the Government wants to see the Stormont institutions restored and says that if they were not in place in the event of a no-deal Brexit, there was risk that the UK government could seek to impose direct rule. “The central priority of the Government in this regard is to work urgently and in partnership with the UK Government to support the restoration of the institutions of the Good Friday Agreement to full operation,” it says.

While questions had been raised about the applicability of any special arrangements reached for Northern Ireland to the case of Scotland, the register said that the situation in the North was unique, given the Good Friday Agreement and thus not directly comparable to Scotland.

The report warns that that Brexit will “amplify” potential looming risks to the Irish economy. It says that regardless of the form Brexit takes, it will impact negatively on the Irish economy “which in turn will have implications both for other potential risks for the economy including the risk of overheating and loss of competitiveness on the one hand, as well as impacting on social risks identified, including expectations for public expenditure, and risks and issues around migration and integration, to name but two”. The report states that Brexit can be seen as “an overarching, umbrella risk, interacting with and amplifying the majority of the risks identified across the geopolitical, economic, social, environmental and technological spheres”.

The report also warns of the risk of the economy overheating , causing risks to competitiveness. It also cautions that expectations of the extent of additional resources available to address social and economic problems may be unrealistic.

“Public expectations of additional expenditure are an increasing concern, especially at this point in the economic cycle,” it says.

“There are also indications that escalating trade conflicts at the international level now appear to be impacting growth, with the IMF warning national governments to prepare for an ‘economic storm’ as global growth levels undershoot expectations.”

It finds that as a small open economy “Ireland is highly exposed to such fluctuations in global economic and trading conditions, and the economic risks in this context for Ireland are significant.”