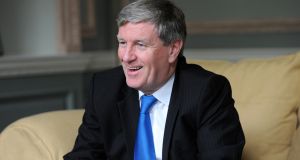 Over three days last week at Churchill College, Cambridge, historians from around the world discussed the Easter Rising in the context of the revolutions and rebellions that transformed much of Europe and the Middle East between 1916 and 1923.

The conference, organised by Cambridge history professor Eugenio Biagini, heard about the reception of the 1916 Rising everywhere from Iceland to China. There were papers on its influence on Indian nationalism and on the Catalan and Basque nationalist movements, as well as on the course of history Britain and Ireland.

Ireland’s ambassador to Britain, Dan Mulhall, who attended the conference, believes a global perspective is useful as Ireland reflects on the events of a century ago.

“I think it’s easier to understand our own experience if we compare it with the experience of others,” he said.

Mulhall, a part-time historian as well as one of Ireland’s most experienced diplomats, turned the embassy in London into a literary salon last year with numerous events marking the 150th anniversary of the birth of WB Yeats. This year, it is an ongoing history seminar, with talks and discussions on the legacy of 1916. The embassy is sponsoring dozens of events around Britain to commemorate the Rising but Mulhall says he approaches the centenary above all in a spirit of curiosity.

“I think that after 100 years, rather than trying to pass judgment on people or events, we need to just remember the things that were important in shaping the subsequent history of Ireland. I don’t think you even need to get into the rights and wrongs of that period. I think that it’s better to focus on what happened, why it happened and to try and understand it. So I approach it with curiosity,” he said.

Mulhall and Biagini have jointly edited a collection of essays based on Conor Cruise O’Brien’s The Shaping of Modern Ireland, which in 1960 surveyed the lives of a number of key figures in early 20th century Ireland. The new book, called The Shaping of Modern Ireland – A Centenary Assessment, published by Irish Academic Press, includes chapters on many of the same figures by contemporary writers including historians Michael Laffan, Diarmaid Ferriter, Joe Lee and Paul Bew, poet Theo Dorgan, former politician and diplomat Martin Mansergh and Irish Times political editor Stephen Collins.

Mulhall and Biagini added a few names who were not in the original book. “The original didn’t have a single woman as the focus of one of the chapters. There was one woman who contributed to the volume, Dorothy McArdle, but there was no woman analysed in the book. Even Countess Markievicz was excluded, which seems strange to my eyes now, given that she was clearly a person of some significance: the first woman elected to the British parliament in 1918 and part of the first Dáil. You would have thought that she might have been considered at that time to have been worthy of inclusion in this book,” the ambassador said.

The Shaping of Modern Ireland

“Our nationalism has become more inclusive, broader, with enough space for everyone to be part of it and I think that’s something that’s worth reflecting on.

“I suppose the marriage equality referendum was another illustration of that, that there was a clear desire to develop an inclusive sense of Irishness. So I think that is part of the story,” he said.

“It’s only one part of the story, of course, but looking back over the last 35 years . . . in my experience I’d say our national identity has broadened and it now includes a reconciliation agenda and it includes a European dimension. It’s not fixed and you couldn’t write it down in a paragraph or even in a book probably. You couldn’t define it.”