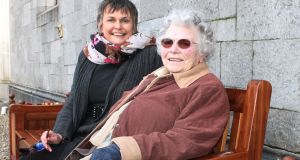 Anne Byrne with her daughter Una. Of being honoured by her alma mater, she said: “Honoured, excited, nervous, but I will take it all as it comes”

A 101-year-old woman who created one of the first recording archives of Irish traditional music and graduated from university in Galway 80 years ago will be honoured by her alma mater tonight.

Anne Byrne, nee Gannon, from Carrigeen, Co Longford, made her first recordings in 1954 using a tape recorder she had bought while working with the Readers’ Digest magazine in New York.

Originally, her aim had been to record the music of her father, Bernard Gannon. An accordion player, he had been born and reared in Argentina of Co Longford parents, and had moved to Ireland in 1906 at the age of 25 to take over a family farm. She heard her father playing Argentine music which he had picked up as a young boy. His repertoire was laced with Irish tunes, including those he had picked up from his brother-in-law, fiddle player Christopher “Kit” Kelly.

Tonight Mrs will give a public interview in NUIG, accompanied by her daughter Una, to discuss her archive, which she donated to the Irish Traditional Music Archive this summer.

“Honoured, excited, nervous, but I will take it all as it comes,” she said of tonight’s event.

Accordionist Mairtín O’Connor will perform some of Mrs Byrne’s favourite tracks during the public interview, which will be conducted with NUIG acting director of the Centre for Irish Studies, Méabh Ni Fhuartháin.

She had also brought home a movie camera from North America, and her tape recordings and colour film footage have been digitised.

Mrs Byrne, who settled in Ardagh, Co Longford , taught five languages, including Latin, as well as other subjects at secondary level. She also had many other strings to her bow, taking part in drama productions at the Irish language theatre An Taibhdhearc in Galway, and both acted with Walter Macken and appeared in some of his plays.

The free event is hosted by NUIG alumni relations, with booking available from aisling.nolan@nuigalway.ie