Removal of US troops from Syria may bolster reconciliation efforts 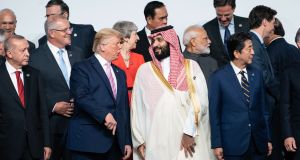 US president Donald Trump’s shock abandonment of Syrian Kurdish fighters who partnered the US in the war against Islamic State could give impetus to regional reconciliation efforts already in train.

Key rulers have not bought the tale told by US officials to justify Mr Trump’s order to withdraw US troops from Kurdish controlled northeastern Syria. They claim he had no choice but to send US soldiers out of harm’s way because Turkish forces were poised to invade and occupy Syrian territory along the border.

Washington’s oldest regional ally, Riyadh had begun to hedge its bets weeks ago by opening channels to Iran despite close personal ties forged by Mr Trump and Saudi royals during his 2017 visit to the kingdom.

The prince told Mr Khan, “I want to avoid war”. Khan conveyed the message to Iranian president Hassan Rouhani during last month’s UN General Assembly in New York. Baghdad has offered to host a meeting between the two leaders.

Pakistani and Iraqi officers have been welcomed by Iranian parliamentary speaker Ali Larijani. “Iran is open to starting a dialogue with Saudi Arabia and other countries in the region,” he told Al Jazeera. “An Iranian-Saudi dialogue could solve many of the region’s security and political problems.”

Missile attacks against oil tankers and commercial vessels off the Emirati coast and in the Gulf of Oman during May and June stoked fears that the flow of oil through the Strait of Hormuz could be disrupted.

The strikes were blamed on Iran, which denied involvement but had vowed not to allow others to ship oil if its exports were halted by US sanctions. Riyadh threatened a “swift and decisive” response, but did nothing while the US formed a naval coalition to escort tankers through the Hormuz choke point.

On June 20th, Mr Trump aborted military retaliation against Iran when it shot down a US drone over the Gulf. In mid-September, the US president also refrained from using force to reply to drone and cruise missile strikes on Saudi oil facilities.

Instead, he ordered the deployment in the kingdom of 200 troops and Patriot anti-missile systems, which are useless against low-flying drones and cruise missiles, leaving Saudi rulers feeling exposed.

Washington’s global rival, Moscow, is another potential mediator. Russian president Vladimir Putin, who enjoys friendly relations with Bin Salman, has been asked by the Organisation of Petroleum Exporting Countries, to help resolve differences between Saudi Arabia and Iran in order to stabilise the oil market. Russia and Saudi Arabia co-operate in fixing quotas and prices.

Riyadh has also said it would seriously consider a call for a countrywide ceasefire from Yemen’s Houthi rebels who, the Saudis claim wrongly, are Iran’s proxies in that country’s devastating and destructive war. Dialogue between Saudi Arabia and Iran could provide Bin Salman a face-saving way of exiting the stalemated Arabian Peninsular war he launched in March 2015.