Iranian support of Assad regime in Syria amounts to billions 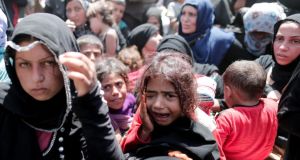 Syrian refugees waiting on the Syrian side of the border crossing near Akcakale, in Turkey’s Sanliurfa province, on Wednesday. Iran has denied it has deployed troops in Syria to bolster the Syrian army and its militia allies although this has been widely reported in the Syrian media. Photograph: Sedat Suna/EPA

UN special envoy Staffan de Mistura estimates that Iran spends $6 billion (€5.3 billion) a year to sustain the Syrian regime. This figure apparently excludes the costs of deployment in Syria of Iranian Revolutionary Guards advisers and specialists and of Hizbullah and Iraqi Shia militia fighters taking part in operations against insurgent and jihadi forces.

Others argue the sum is much higher, including former US Institute of Peace official Steven Heydemann, who claimed the annual sum to be $15-20 billion.

The White House says Tehran is spending small amounts on some external allies, including Palestinian Hamas and Islamic Jihad and Yemen’s Houthis. US president Barack Obama has argued: “The great danger that the region has faced from Iran is not because they [the Iranians] have so much money. Their [military] budget is $15 billion compared to $150 billion for the Gulf states.”

He did not mention that unlike Saudi Arabia and the Gulf states, Iran’s purchases of military material are severely curbed and it is likely that embargoes on weaponry could be the last to be lifted.

US treasury secretary Jack Lew told a conference in Israel that the sum Iran spent on external aid was “small” and pointed out Iran’s sanctions-ridden economy cannot support large expenditures.

The US has played down Iran’s financial investment in the Syrian war because the White House does not wish to undermine negotiations with Tehran over its nuclear programme and is allied with Iran in the battle against Islamic State in Iraq. Washington is also trying to calm Israeli and Arab fears that once a deal is done with Iran and sanctions ease, Tehran will invest more money on its military as well as on its allies.

Meanwhile, Iran denies it has deployed troops in Syria to bolster the Syrian army and its militia allies. However, the deployment has been widely reported in the Syrian media, which put the figure at 7,000 around Damascus and said a similar number would be sent to Latakia on the coast. It is believed they are to take part in action to retake Idlib province from al-Qaeda-affiliate Jabhat al-Nusra.

Reports that fighters have been deployed from “countries friendly to Syria” are “unfounded”, according to Iranian foreign ministry spokeswoman Marzieh Afkham. However, it has also been reported that Iraqi Shia fighters who had served in Syria but returned to Iraq to battle IS in Tikrit, have redeployed in Syria.

The current focus has been on Iranian expenditure in Syria rather than in Iraq, where Tehran has a much higher stake in fighting IS and preserving the current Shia fundamentalist regime, dominated by the Dawa movement loyal to Tehran.

However, in Iraq, the US and some of its allies count on Iranian-backed militia ground forces which have been responsible for retaking territory seized by IS, including the city of Tikrit. These well-equipped and well-trained militias, grouped in the Hashd al-Shaabi, or national mobilisation units, are leading the battle against IS in Iraq while a number of Iranian frontline advisers have been killed or wounded while serving with advance units of the Iraqi army, the Kurdish peshmerga militia and Shia militias.

Iran’s involvement in the anti-IS and anti-al-Nusra campaigns in Iraq and Syria has prompted Sunni Saudi Arabia to claim that non-Arab Shia Tehran seeks to impose its hegemony over the Arab world.