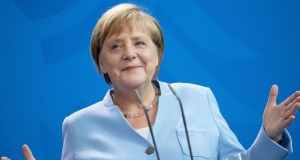 German chancellor Angela Merkel. After two weeks of home quarantine she has returned to work in her Berlin office

After two weeks of home quarantine, German chancellor Angela Merkel returned to work in her Berlin office on Friday, with a popularity jump and speculation of a fifth term.

Even as Germany’s coronavirus death toll topped 1,000 on Friday, with more than 82,000 confirmed cases, a new poll shows two-thirds of German voters think her federal government has handled the crisis well or very well.

In just a month Merkel’s approval rating has jumped 11 points to 64 per cent, according to the poll for Germany public broadcaster ARD, making her the country’s most popular politician.

Her two weeks working from home – a precaution after her doctor tested positive for Covid-19 – has not hurt her ruling Christian Democratic Union (CDU) either. The poll shows the party up seven points to 34 per cent, one point higher than on election night 2017.

The surge in support for Merkel is an interesting complication in the CDU’s tortuous hunt for a new leader – on indefinite hold because of coronavirus.

Stirring the pot the Bild tabloid dropped its critical tone towards Merkel on Friday, and suggested her steady hand was just what Germany needed right now. Under a speculative headline – “Fifth term because of Corona?” – it quoted unnamed government politicians who were “really glad” she was still in charge.

Merkel has said she stands by her plan to depart after her fourth term next year – even after her chosen successor as CDU leader, Anngret Kramp-Karrenbauer, threw in the towel after a year.

An extraordinary CDU party conference to choose another leader this month has been postponed indefinitely, increasing fears that any new chair will struggle to get established before an autumn 2021 election.

Already some are suggesting the CDU should give way next year to its Bavarian sister party the Christian Social Union (CSU) and its leader Markus Söder.

The ambitious 53-year-old Bavarian minister president has impressed friend, and even some foes, with his steady leadership in the crisis. With an eye on neighbouring Austria, Bavaria was the first to introduce a lockdown and widespread coronavirus testing. On Friday Söder made another push forward with a scientific study to identify the spread of coronavirus with blood tests of 3,000 selected households.

As he spoke two leading betting firms announced Söder was their favourite to lead next year’s CDU/CSU campaign to retain the chancellery.

Such a move is not without precedent: in 1980 Helmut Kohl deferred to CSU leader Franz-Josef Strauss as chancellor hopeful. Strauss failed and two years later Kohl was in office after organising a successful vote of no confidence against Social Democrat (SPD) chancellor Helmut Schmidt.

Just ahead of him on 60 per cent is is Jens Spahn, the federal health minister. He has made no secret of his chancellery ambitions, and the current crisis has given him plenty of opportunities to build his profile – and political credibility – while doing his day job.

On Friday, Germany’s disease control officials said the two-week lockdown was beginning to have an effect on infection numbers, but warned that Germany was still “at the start of this epidemic”.

Lockdown measures have been extended to April 19th, while the ARD poll suggests 93 per cent of Germans agree movement restrictions are the correct approach.

And while numbers of infections are still doubling every eight days, a vast majority of Germans – 77 per cent – are confident their doctors and health system can cope with what lies ahead.

There is widespread ambivalence about plans for a smartphone app to track and trace possible coronavirus contacts, with 47 per cent in favour and 45 per cent saying they would not use it.

In a new push to control the spread of Covid-19, Germany is preparing antibodies tests of up to 100,000 people who already had the virus to assess how many are now immune.

Curiously, while one in five German firms now fears insolvency, the ARD poll shows more Germans are confident about the future than in the last survey in January: up nine points to 44 per cent.