Statues destroyed by Islamic State in Mosul were copies 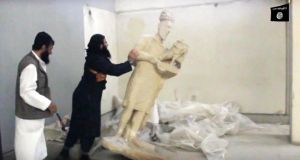 Two weeks ago, the Islamic State movement released a video that appeared to show members demolishing statues dating back to the 7th century BC in Iraq’s second city of Mosul.

The lump-hammer rampage was denounced around the world as an attack on the world’s cultural heritage, worse than the Taliban’s 2001 demolition of sixth-century Buddha statues in Afghanistan or al-Qaeda’s 2012 ransacking of 12th-century Islamic shrines in Timbuktu.

Now, curators at Iraq’s state museum in Baghdad have said the upset was unfounded: the statues demolished were not the real deal.

A museum director told Germany’s Deutsche Welle broadcaster: “They were copies. The originals are all here.”

Museum staff studied the video clips released by IS and identified many of the items featured as part of the collection in the state museum.

The Baghdad institution is home to one of the world’s largest archaeological collections. About 15,000 exhibits were looted in 2003, after the fall of Saddam Hussein. Some 4,300 items were returned and, after 12 years of reconstruction, the museum reopened last month.

Among their exhibits are the originals of items pulverised in the IS video.

“None of the artefacts destroyed in the video were originals,” she told Deutsche Welle.

Islamic State has occupied Mosul since June and, on February 26th, masked members stormed the city museum, also pillaged in 2003.

The video showed jihadists toppling statues and using a jackhammer to deface a 40-tonne statue.

In the video, an IS member said: “These statues and idols . . . became worthless to us even if they are worth billions of dollars.”

But the attack now appears to have been less an act of cultural barbarism than of cultural ignorance.

Atheel Nuafi, Mosul’s exiled governor, agreed that many items destroyed were merely reproductions of priceless originals – though not all.

“There were two items that were real and which the militants destroyed,” he told Iraq television. “One is a winged bull and the other was the God of Rozhan.”

He suspects IS jihadists took at least seven items with them before destroying the museum.

Iraqi authorities have alerted Unesco about the missing items.