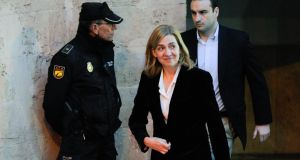 Princess Cristina, sister of King Felipe VI of Spain, is to stand trial on charges of tax fraud. The princess (49) will become the first modern Spanish royal to face court prosecution.

The development came as Judge Jose Castro concluded a four-year investigation into the dealings of a company partly owned by Princess Cristina’s husband, Inaki Urdangarin, deciding to press charges against the princess relating to the fiscal years of 2007 and 2008.

Princess Cristina and her husband are among 17 people who will go on trial for offences relating to the now-defunct Noos Institute, a non-profit company that allegedly charged inflated prices to regional governments for leisure-related events.

Judge Castro, who heard testimony from the princess in a Mallorca court earlier this year, ruled yesterday that she had “directly benefited in financial terms” from the alleged crimes.

Mr Urdangarin and his former business partner, Diego Torres, are said to have used the Noos Institute to siphon off some €6 million into tax havens.

The judge has ordered the princess to put up a liability bond of €2.6 million, but she is unlikely to receive a jail sentence of more than two years, which means she will almost certainly avoid imprisonment if found guilty.

Mr Urdangarin faces up to 20 years in prison if convicted. Both have denied wrongdoing.

In a statement yesterday, the royal household stressed its “total respect for judicial independence”, adding that the princess’s decision on whether to renounce her right to succession was hers alone. – (Guardian service)