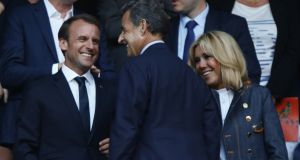 Four prominent members of the new government announced on July 6th have long-established ties to Sarkozy. Jean Castex, the prime minister, was Sarkozy’s social affairs adviser and deputy secretary general of the Élysée during Sarkozy’s 2007-2012 presidency. The moment he was appointed, Castex telephoned Sarkozy, the Canard reported.

Gérald Darmanin was promoted from budget minister to minister of the interior, the path taken by Sarkozy 15 years ago. Like Sarkozy before him, Darmanin, age 37, is a young man in a hurry, with presidential ambitions. Darmanin ran Sarkozy’s campaign for the presidential primary in 2016.

Sarkozy’s former speechwriter, Camille Pascal, told RMC radio he texted the former president: “I’m surprised nobody told me you were back.” Sarkozy asked him to “stop saying [the new government] is Sarkozyste” but nonetheless proclaimed himself “very happy for the country . . . because it’s in good hands now”.

“It is a secret for no one that Emmanuel Macron and Nicolas Sarkozy are in contact,” an adviser to Macron said. “The president found it useful to solicit the advice of Mr Sarkozy on several subjects.”

Although the 2008 financial crisis was very different from the coronavirus epidemic, the adviser said Macron wanted to know how Sarkozy handled “politico-administrative organisation, European and global co-ordination”.

Virtually no one mentions the string of financial scandals that continue to dog Sarkozy. The former president’s first trial, for alleged corruption and influence-peddling, is scheduled to take place from November 23rd until December 10th.

Sarkozy and his lawyer Thierry Herzog – who is close to the new justice minister Eric Dupond-Moretti – are accused of attempting to bribe a supreme court justice in exchange for information regarding another investigation into Sarkozy’s affairs.

Sarkozy has been involved in nine cases regarding financial impropriety. Several have been dismissed, but the former president also faces trial for illegal campaign financing in the Bygmalion scandal. And he remains under investigation for allegedly receiving large sums from the late Libyan dictator Muammar Gadafy.

French feminists were outraged at the appointment of Darmanin and Dupond-Moretti. Darmanin is accused of rape by Sophie Patterson-Spatz, who sought Darmanin’s help when he was head of legal services at the party in 2009. He says they had consensual sex. The case was dismissed, but Patterson-Spatz recently persuaded a judge to reopen the investigation.

Laurence Rossignol, a Socialist senator and former minister for women’s rights, told Europe 1 radio that the interior and justice ministries, now under Darmanin and Dupond-Moretti, are central to the fight against violence against women, which affects more than 220,000 women annually.

Macron has labelled the fight against violence against women “a grand national cause”. In response to the outcry over the nominations, the Élysée lists recent measures including more severe punishment for men convicted of violence, extending the statute of limitations and the creation of the offence of “sexist outrage” for harassment. The Élysée said the rape accusation against Darmanin “was not an obstacle” to his appointment, adding that he is innocent until proven guilty.

Dupond-Moretti, who is France’s best-known criminal lawyer, criticised the #MeToo movement. When he joined the government, Dupond-Moretti espoused the great causes of Macron’s term, the presidential adviser said.

The appointment of a new prime minister and government were meant to fulfil Macron’s promise during the lockdown to “reinvent” himself and establish a “new path” for the country. He may better explain his strategy next Tuesday, Bastille Day. In the meantime, the reinvention and new path are shrouded in illusions and difficult to decipher.

New ministers vaunt their humble origins. One is a former taxi driver. Several are the children of cleaning ladies, or descendants of immigrants. No one wants to appear affluent or highly educated. Yet power continues to reside with a handful of men from the elite grandes écoles.

The Élysée claims Macron has balanced all sensibilities in his new government. Yet deputies from his party, La République en Marche, are bitterly disappointed, as are Macron’s allies in the centrist party MoDem. The fact that a Socialist and a Green are nominally the two highest-ranked cabinet members convinces no one. The left-leaning faction of LREM were virtually evicted from the new government.

The autumn promises to be explosive. Health officials fear a second wave of coronavirus infections. Protests began this week against the scheduled lay-offs of more than 27,000 employees at major companies. And in the midst of the worst recession since the second World War, Macron is determined to resuscitate pension reform, despite opposition from trade unions and business management.