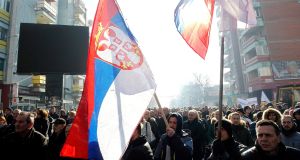 Several thousand Serbs from Kosovo take part in a protest after a train with the slogan “Kosovo is Serbia” travelling from Belgrade to Kosovska Mitrovica was prevented from entering Kosovo. Photograph: EPA/Djordje Savic

Russia has warned of rising tension in the Balkans and urged the European Union to defuse a spiralling dispute between Kosovo and Moscow’s ally, Serbia.

Kosovo barred entry on Saturday to a train emblazoned with Serbia’s national colours and the slogan “Kosovo is Serbia”, in reference to Belgrade’s claim to sovereignty over its former region, which declared independence in 2008.

About 10,000 members of Kosovo’s ethnic Albanian majority were killed during Belgrade’s 1998-9 war with separatist rebels, and some 200,000 Serbs and Roma later fled reprisals in the region after Nato bombing ousted Serb forces.

“Unfortunately, the Balkans have more than once been the source of very serious conflict . . . I hope this time everyone understands the need to prevent such armed confrontation, but tension is rising to a significant degree,” Russian foreign minister Sergei Lavrov said on Tuesday.

“As regards the train that was stopped by Kosovo’s special forces, the EU should sort out this situation through the implementation of previous agreements between Belgrade and Pristina, according to which Albanian security forces should not be present in the Serb enclaves of northern Kosovo,” he added.

A special national police unit was deployed on Saturday to block the train line, however, reflecting the security threat perceived by Mr Thaci and other top officials in Pristina.

“Serbia’s intention is to use this train, which was donated by Russia, first to help carve away the northern part of Kosovo and then . . . attach it to Serbia. It is the Crimea model,” Mr Thaci said.

The former rebel commander told Reuters that any Serb bid to take Kosovo’s territory would spark “a chain reaction across the whole western Balkans”.

The train stopped before reaching the Serbia-Kosovo border, but Mr Nikolic said the incident had brought the neighbours to “the brink of conflict” and “showed that the Albanians want war”.

“If they are killing Serbs, we will send the army, all of us will go, I will go as well,” added Mr Nikolic, who was an ally of warmongering 1990s Serbian leader Slobodan Milosevic.

Like Serbian prime minister Aleksandar Vucic, Mr Nikolic claims to have abandoned ultra-nationalism and now advocates EU accession, as long as Belgrade does not have to recognise Kosovo’s independence or distance itself from Russia.

Some analysts see the current spat as Mr Nikolic’s bid to secure nationalist backing in April’s presidential elections, or an attempt to discern where incoming US president Donald Trump stands on Balkan issues.

On Tuesday, Mr Nikolic blamed US policy for many of the Balkans’ problems, before adding: “I hope that with the new (US) administration that kind of behaviour will stop.”