Three families, including six children, boarded the plane to Rome with the pope

Pope Francis returned from a visit to the Greek island of Lesbos on April 16th, taking 12 Syrian refugees with him as a 'gesture of welcome' amidst what he called 'the greatest humanitarian catastrophe since World War Two' Video: Reuters 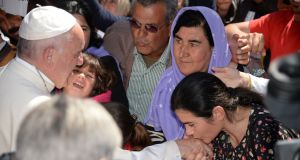 Pope Francis meets refugees at the Moria refugee camp, on the Greek island of Lesbos on Saturday. Photograph: Filippo Monteforte/Pool Photo via AP 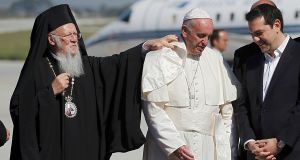 Greek Orthodox Ecumenical Patriarch Bartolomew I adjusts the collar of Pope Francis as he stands with Greek prime minister Alexis Trispras (R) on arrival on the Greek Island of Lesbos. Photograph: Reuters 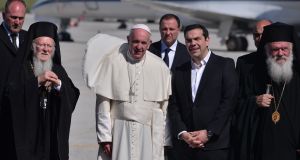 Pope Francis is greeted by Greek prime minister Alexis Tsipras (2nd-R), Archbishop of Constantinople and Ecumenical Patriarch Bartholomew I (L), and Archbishop of Athens and All Greece Ieronymos II (R) upon his arrival on Lesbos. Photograph: AFP/Getty Images 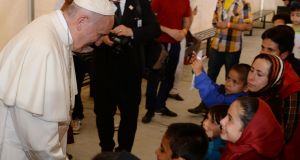 Pope Francis greets migrants at the Moria refugee camp near the port of Mytilene on the island of Lesbos, Greece on Saturday. Photograph: EPA 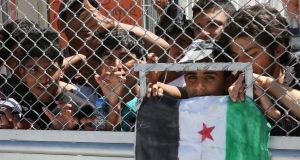 Refugees shout the word ‘Freedom’ as Pope Francis arrives at the camp for refugees in Moria, on Lesbos, Greece on Saturday. Photograph: Orestis Panagiotuou/EPA 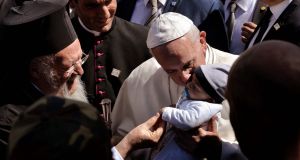 Pope Francis returned from a visit to the Greek island of Lesbos on Saturday, taking 12 Syrian refugees with him as a “gesture of welcome” amidst what he called “the greatest humanitarian catastrophe since World War Two”.

The Vatican confirmed that 12 Syrian refugees, all of them Muslim, were travelling with the pope back to Italy from Greece. The three families, including six children, met with Francis on the tarmac on Lesbos and boarded the plane.

In a statement, the Vatican said Francis wanted to “make a gesture of welcome” to the refugees, who were in camps on the Greek island before the agreement between the EU and Turkey to return migrants came into effect.

Under the controversial agreement, all those arriving on Greek islands after March 20th are detained and deported back to Turkey unless they successfully apply for asylum in Greece.

The Vatican will take responsibility for supporting the families, with the Catholic Sant’Egidio community taking care of getting them settled initially.

Earlier, migrants wept at his feet, kissed his hand and begged for Pope Francis’s help at a Greek refugee camp on the frontline of Europe’s migrant crisis which has claimed hundreds of lives in the past year. The pontiff visited the camp along with Ecumenical Patriarch Bartholomeos, the spiritual leader of the Orthodox Church, and was welcomed by Greek Prime Minister Alexis Tsipras.

At a sprawling fenced complex on the Aegean island, adults and children broke down in tears, pleading for help after their onward journey to Europe was cut short by an EU decision to seal off a migrant route used by a million people fleeing conflict since early 2015.

The pope, leader of the world’s 1.2 billion Roman Catholics, shook hands with hundreds of people as hundreds more were penned behind metal barriers at the Moria camp, which holds some 3,000 people. 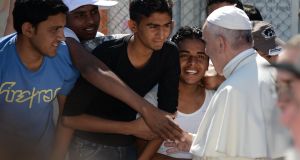 “Freedom, freedom,” migrants chanted as the pope walked through the hillside facility in scorching sun. Some women ululated.

On at least three occasions, adults fell to the feet of the pontiff, weeping and begging for help. One woman wearing a crucifix broke through a police cordon and flung herself at Francis’s feet.

“No camp, no camp,” the woman, who appeared to be in her early thirties, sobbed. “I want to go.”

In a tent where Francis met with migrants, a little girl with pigtails dressed in pink and white bowed at his feet. An adult man broke down. Migrants slipped pieces of paper into his hand as he passed by, which he handed to an aide.

The pope has often defended refugees and urged Catholic parishes in Europe to host them. His first trip after becoming pontiff in 2013 was to the Sicilian island of Lampedusa, which, like Lesbos, has received thousands of refugees.

Hundreds of people have died making the short but precarious crossing from Turkey to the Lesbos shores in inflatable dinghies in the past year, and the island is full of unmarked graves.

“This is a trip that is a bit different than the others ... this is a trip marked by sadness,” Francis told reporters on the plane taking him to Lesbos.

“We are going to encounter the greatest humanitarian catastrophe since World War Two. We will see many people who are suffering, who don’t know where to go, who had to flee.

We are also going to a cemetery, the sea. So many people died there ... this is what is in my heart as I make this trip.”

Aid organisations have described conditions at Moria, a disused army camp, as appalling.

“This is like Guantanamo. We just want to leave,” said Ahmed, a 29 year old from Mosul in Iraq.

Journalists normally have no access to the facility on a hillside just outside Lesbos’s main town of Mytiline, but aid workers said walls were whitewashed, a sewer system fixed and several dozen migrants at the overcrowded facility were transferred to another camp, which the pope will not visit.