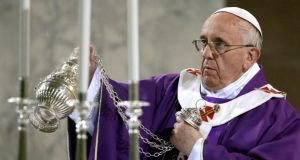 
Pope Francis was yesterday bitterly criticised by abuse victims’ lobbies, following his forthright defence of the Catholic Church’s handling of the clerical sex abuse crisis of the last 15 years.

Speaking in an interview in yesterday’s Milan daily, Corriere Della Sera , Pope Francis reflected on the momentous year that followed his election as pope last March.

Interviewer Ferruccio de Bortoli, the paper’s editor, at one point suggested that the worst of the sex abuse scandals was now “behind” the church, then asking if it was true that secular society had a “bad conscience” about its treatment of children.

“I want to say two things,” the pope responded. “These cases of abuse are awful because they leave very deep wounds. Benedict XVI was very courageous and he opened up a way to deal with this, and the church has done a lot going down that road. Perhaps more than anyone else.

“The statistics on child abuse are terrifyingly clear and they show that the vast majority of child abuse takes place within the home or the extended family. The Catholic Church is perhaps the only public institution to have moved with such transparency and responsibility. No one has done as much. And yet the church continues to be the only organisation that is attacked . . .”


‘Disingenuous’
The Survivors’ Network of Those Abused by Priests (Snap) strongly rejected the pope’s defence, saying his comments reflected an “archaic, defensive mindset”.

The group suggested the Pope should “summon Archbishop Diarmuid Martin from Dublin” and put him in charge of the “process” of dealing with sex abuse crisis, or make him prefect of the Congregation for the Doctrine of the Faith (CDF).

When the Holy See announced last December that the Vatican would be assembling its first ever Child Protection Commission, many insiders suggested that Archbishop Martin would be a logical choice to serve on the body.

So far, no nominations have been confirmed, although many believe the authority will be led by Maltese bishop Charles Scicluna, a man with a long experience of the sex abuse crisis from his time as chief prosecutor at the CDF.