Critics fear a Duda re-election will mark the end of liberal democracy, 30 years after end of communist rule 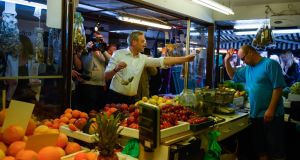 While UK and Irish lockdown audiences were glued to a certain television drama, Polish viewers learned from an adviser to President Andrzej Duda that the country’s LGBT community were “not equal with normal people”.

The televised remark was just one in a series of attacks by the ruling Law and Justice (PiS) party against Poland’s lesbian, gay, bisexual and trans community in its drive to secure Duda’s re-election.

Ahead of Sunday’s first-round poll, the 48-year-old lawyer-turned-president has promised his national conservative voter base he will defend “traditional” Polish values if he secures a second five-year term as head of state.

While fans praise Duda’s common touch in small-town Poland, rivals say he is a political puppet of PiS leader Jaroslaw Kaczynski. Critics fear a Duda re-election will mark the end of liberal democracy and the separation of powers in this central European country, 30 years after its transition from communist rule.

While Duda is the frontrunner in the election, postponed from last month because of the coronavirus pandemic, he faces a tighter race than expected. His main rival is Warsaw mayor Rafal Trzaskowski, a liberal supporter of LGBT rights, who has surged in opinion polls.

None of the 10 candidates are likely to attract the necessary 50 per cent of the vote to win outright, meaning Duda and Trzaskowski are likely to face each other in a runoff on July 12th.

At rallies in the early part of his campaign, Duda told audiences the LGBT rights movement was a harmful “ideology” more dangerous to Polish identity than post-war communism. When criticised – from rivals and critics outside Poland – PiS supporters insist they are not attacking LGBT people but their “ideology”.

Yet the anti-LGBT campaign is proving less effective than last year, when it helped secure PiS its second term in office. In the last days of campaigning Duda has pivoted away to other themes, even flying to Washington on Wednesday as the first head of state to meet US president Donald Trump since the outbreak of the pandemic.

At a press conference in the White House Rose Garden, Trump extolled close US-Polish ties and praised Warsaw for being one of eight Nato members meeting its spending commitments – unlike “delinquent” members such as Germany.

Trump promised to send to Poland some of the troops he is withdrawing from US military bases in Germany, without going into specific numbers. Duda said: “If I’m asked by anybody if I am ready that Poland receives more US troops in our country, of course, I am ready.”

The visit and its timing were criticised as “partisan” by former secretary of state Madeleine Albright. Echoing critics in Europe, lead by the European Commission, she said Duda and PiS were “attacking the rule of law, independent media and minority groups”.

Since taking office PiS has has pushed a radical reform agenda that it says is necessary to free Poland of encrusted structures and people who hung on after the country’s transition from communist rule.

If elected Trzaskowski, has promised to defuse the polarising effects of Poland’s reform agenda. “I am fighting for a Poland where not everything we have achieved in the last 30 years is trampled on,” he said.

Among its more far-reaching reforms in office, PiS has merged the state prosecutor role with that of the justice minister and appointed judges with ties to the ruling party in the most senior courts, as well as to the body for appointing judges.

A Trzaskowski win in the second round could recalibrate Poland’s political calculus and hobble PiS reform ambitions. The ruling party controls only the lower house of parliament, with a five-seat majority, and would need a three-fifths majority to legislate past the upper house and a presidential veto.