Polish government hits back at letter of support for LGBTI community 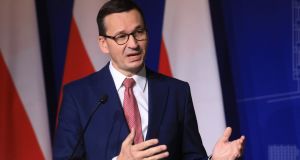 Poland’s government has hit out at an open letter of support for the country’s LGBTI community signed by 50 ambassadors to Warsaw, including Ireland’s ambassador Emer O’Connell.

Poland’s lesbian, gay, bisexual, transgender and intersex community were, the letter said, entitled to “the full enjoyment” of universal human rights enjoyed by everyone else.

The rare intervention in domestic affairs by ambassadors, calling for “non-discrimination, tolerance and mutual acceptance”, comes amid growing rhetoric against the LGBTI community from members of the ruling national conservative Law and Justice (PiS) party.

“Nobody needs to teach us tolerance,” he said at a press conference, “because we are a nation that has learned such tolerance for centuries.”

In the run-up to last year’s general election, and this year’s presidential election, PiS politicians denounced the LGBTI community as supporting an “ideology” that was at odds with traditional Polish values.

Poland’s president Andrzej Duda, allied with PiS, secured a second term after telling voters on the campaign trail: “They try to convince us they are people, but it’s just an ideology.”

Polish LGBTI campaigner Bart Staszewski told The Irish Times it was “obvious to everybody that the Polish government is sponsoring homophobia and discriminating [against its] own citizens”.

The letter was signed by the ambassadors of most European countries, including the UK and Ukraine, as well as Israel, Japan and Australia, and has stung critics of LGBTI “ideology” into action.

Joachim Brudzinski, deputy head of PiS and member of the European Parliament, hit back demanding a letter defending persecuted Christians and pro-life activists.

Earlier this year he wrote on Twitter that “Poland without LGBT is most beautiful” and “realising God’s plan”.

“It tells you the strength of feeling and concern around Europe and the world,” he said. “The Irish Government now needs to step up a bit further and look for EU-wide insistence on basic protections, that apply to everyone elsewhere, to apply in Poland.”

“We continue to support initiatives condemning violence and discrimination on the basis of sexual orientation or gender identity,” he wrote.

A move by cities in eastern and southern Poland to declare themselves “LGBT-free” has drawn complaint from the European Commission and many EU countries.

Cork county councillors are on course next month to end the twinning relationship between one such town, Nowa Deba, and Fermoy.

“We have nothing against the people of Nowa Deba, it’s the people that represent them,” said Noel McCarthy, Cork Fine Gael councillor for Fermoy. “We have to show a message to them that we are not going to accept discrimination against any community, not just LGBTI.”