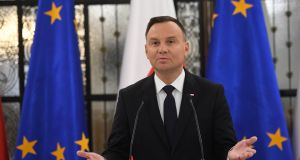 Poland’s president Andrzej Duda has vetoed a law that would have demoted officials involved in the imposition of martial law in Poland 37 years ago, in his latest clash with the ruling Law and Justice party.

The bill, passed by parliament this month, is part of broader efforts by Law and Justice to erase the legacy of communism in Poland. Jaroslaw Kaczynski, the party’s veteran leader, believes communist figures have not been adequately held to account for their actions during decades of authoritarian rule.

The legislation would have demoted officials on the communist-era military council that ran Poland from late 1981 until July 1983, including now-deceased generals such as Wojciech Jaruzelski, who headed the council, and Czeslaw Kiszczak, who was interior minister at the time.

In a statement on Friday, Mr Duda said that while he believed in the bill’s symbolic importance as a way of “closing the chapter” on the country’s communist past, he considered it unfair as it did not allow those affected – some of whom are still alive – to appeal.

“We cannot restore justice in Poland while at the same time introducing unfair solutions,” he said. “I would not want a law to be enacted which ... would divide our society instead of being accepted with understanding.”

A Law and Justice spokeswoman said the party was “surprised and disappointed” by Mr Duda’s decision. Antoni Macierewicz, a hardline former defence minister who has frequently clashed with Mr Duda, told Radio WNET that the move was “the latest step in the very wrong direction we have been [going] in recent months”.

As president, Mr Duda is constitutionally a non-partisan figure, but he was backed by Law and Justice in his bid for election in 2015, and did not veto any of the government’s legislation during the first two years of his term.

However he began to play a more independent role last year, most notably by vetoing two laws that formed a key part of Law and Justice’s controversial attempt to reform the judiciary, a move that provoked fury among the party’s leaders.

Observers said his latest move could be part of an effort to bolster his standing among non-Law and Justice voters before the next presidential election, due in 2020.

“If Duda wants to win another term, he needs to get 50 per cent of the vote. The support of one party is not enough,” said Michal Szuldrzynski, a political commentator from the Rzeczpospolita newspaper. “He also has to appeal to other voters.”

However, Mr Szuldrzynski said Mr Duda’s veto could also help Poland avoid further trouble with the EU in its protracted dispute over the rule of law, arguing that given the lack of an appeals procedure, the demotion bill would have been viewed as incompatible with EU legislation.

“This is the second time that Duda has helped Law and Justice out of a difficult position. The first time was last summer: before he vetoed the judicial reform, there were huge protests, but by the time the amended version went through, the protests were much smaller,” he said. “This is similar: this law would have been seen as a breach by European courts, and he has given Law and Justice a chance to change it.” – Copyright The Financial Times Limited 2018