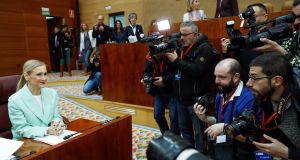 Cristina Cifuentes attends the town hall’s plenary session in Madrid, a day after news broke of the scandal that accuses her of falsifying a university master’s degree. Photograph: Emilio Naranjo/EPA

The president of the Madrid region is fending off calls for her resignation following accusations that she was fraudulently awarded an MBA by a public university and that she has repeatedly lied in a bid to cover up her tracks.

Cristina Cifuentes appeared in Madrid’s regional parliament on Wednesday to respond to the allegations, which she claims are part of a political witch hunt.

In March, El Diario newspaper published a string of revelations that cast doubt on the legitimacy of the post-graduate degree in Regional Law Ms Cifuentes was awarded in 2012. The one-year degree course, at Madrid’s King Juan Carlos University, included 1,500 hours of classes, study and presentation, with students required to attend at least 80 per cent of classes.

However, none of the students consulted by El Diario said they had ever seen Ms Cifuentes in class, despite the fact that she was already a well-known politician.

It also transpired that she only registered for the MBA three months after it began and that the marks for two of the 12 modules in her file had been given two years after the course was completed.

Her end-of-course thesis has also come under scrutiny. On the day that she claims she defended her paper, the staff of her department were reportedly attending an event outside Madrid.

Ms Cifuentes says she lost the thesis in one of several house moves. The university has so far not presented it.

“Neither my CV nor my grades have been falsified or forged,” she said on Wednesday, as she accused the opposition of “parliamentary fraud” in forcing her to appear in the regional chamber.

The case has also tainted the university, which El Diario says colluded with the politician in trying to cover up the affair with forged papers. “Cifuentes has not stopped lying and the only doubt is whether she will keep lying or will finally resign with the little dignity that she has left,” said the newspaper.

The affair is particularly uncomfortable for a politician who only two months ago declared that she had “zero tolerance for corruption”.

The MBA title allows Ms Cifuentes to study for a PhD, which in turn could help her get a high-level institutional post on retiring from politics. However, she has said she only took the course out of intellectual curiosity.

The spokesman for the Madrid regional government, Ángel Garrido, has defended his boss, claiming the scandal is driven by the fact that she is “the most formidable adversary the opposition has at every level”.

But outside the regional arena support for Ms Cifuentes from her Popular Party (PP) has been less effusive.

The case could be extremely damaging for the conservative PP, which also governs Spain. A string of corruption cases has decimated its senior ranks in Madrid. If Ms Cifuentes were forced to resign, there is a shortage of heavyweight  candidates to replace her. If she does not, the Ciudadanos party could withdraw its support, causing the regional government to collapse.

While several opposition parties have called for her to step down if she cannot prove her innocence Ciudadanos called on Wednesday for a parliamentary investigation.