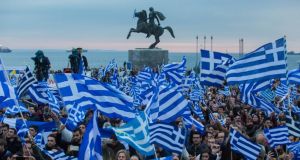 A protest against Macedonia in Thessaloniki in Greece. Photograph: Nicolas Economou/NurPhoto via Getty Images

These are unusually busy days for the VIP section of Macedonia’s international airport.

Nato secretary-general Jens Stoltenberg flew in on Wednesday, followed by Austrian chancellor Sebastian Kurz on Friday and on Saturday his German counterpart Angela Merkel is due to visit Skopje.

They are here to lend heavyweight support to a deal between Macedonia and Greece that would end their 27-year row over the ex-Yugoslav republic’s name, clearing the way for it to join Nato in 2019 and launch European Union accessions talks.

Supporters say the deal would help calm the Balkans at a time of uncertainty, show that the still ethnically divided region can solve disputes through peaceful compromise, and stymie alleged Russian hopes of exploiting instability in the area.

First, however, the agreement will be put to Macedonians in a referendum on September 30th and then to a vote in the nation’s fractious parliament, where the pact could be torpedoed by critics who call it a treasonous capitulation to Athens.

‘Too big to fail’

Fresh from talks in Washington with US secretary of state Mike Pompeo, Macedonian foreign minister Nikola Dimitrov said the national, regional and geopolitical importance of the accord made it simply “too big to fail”.

To warm praise from EU, US and Nato leaders, Dimitrov and his Greek counterpart Nikos Kotzias signed the pact in June on the shore of Lake Prespa, which straddles their countries’ border.

They agreed that Macedonia would become North Macedonia – obviating the objection of Athens to its use of the same name as a neighbouring province of Greece – in return for the Greek government lifting its veto on Skopje’s EU and Nato hopes.

The deal was clinched by Macedonia’s Social Democrat-led government barely a year after it took power, following a political crisis that ended 11 years of nationalist VMRO-DPMNE party rule and a deep freeze in relations with Athens.

“When we started these talks with our Greek friends – I can say this definitely for us and I think for Athens too – we were far from ready to accept what we accepted at the end of the process,” Dimitrov told The Irish Times in Skopje.

“You cannot change identity. It is the result of a historic process and not a decision of one generation, or a political decision. So we are Macedonians, we have the right to self-identify, to self-determination, to speak the Macedonian language – this is all in the terms of the agreement,” he explained.

Macedonia’s two million people will have their say this month, but VMRO-DPMNE and the country’s president, Gjorge Ivanov, have already made their positions clear.

Ivanov, who is close to the nationalists, denounced the deal as a “criminal act” and VMRO-DPMNE filed treason charges against Macedonian prime minister Zoran Zaev.

They say they cannot support any agreement that obliges Macedonia to change its constitution, and they object to the referendum question – which asks people if they back EU and Nato membership by accepting the name deal – because it combines issues which should be distinct.

“The government spin is that this is the last chance to get to Nato and the EU, but I think it is having the opposite effect to what the government thought,” said Aleksandar Nikoloski, deputy leader of VMRO-DPMNE.

As well as changing Macedonia’s constitutional name, the agreement states that the neighbours have no territorial disputes and that the mostly Slav country has no claim to the history or culture of Greek Macedonia, or to the legacy of its ancient ruler Alexander the Great.

This is a blow to VMRO-DPMNE who, while in power, spent hundreds of millions of euro on an eye-popping makeover of central Skopje, erecting monuments and statues that drew a historical line from Alexander to today’s Macedonia, via Ottoman-era revolutionaries and 1940s anti-fascist fighters.

The foreign leaders visiting Macedonia this week may notice that its airport and main highway no longer bear Alexander’s name, after Zaev ordered it to be removed as a goodwill gesture to Greece.

The scrapping of the nationalists’ sometimes aggressive – and expensive – nation-building project coincides with a blizzard of court cases against major VMRO-DPMNE figures, including former top officials, for alleged crimes ranging from corruption and abuse of power to the illegal wiretapping of some 20,000 people.

The nationalists claim the cases are politically motivated, and their supporters’ anger at Zaev’s government – which includes parties from Macedonia’s 25 per cent ethnic Albanian minority – is now mingled with fury over the name deal.

VMRO-DPMNE is expected to announce in the coming days whether it will call for a boycott of the referendum, which could hold turnout below the required 50 per cent, and it is already holding protests against the agreement with Greece.

“I don’t expect violence, but the country is highly polarised,” Nikoloski said. “However this ends, all parties should work together to calm the situation, because this level of polarisation can only create problems for the future of the country.”

Greece has already tackled another threat, expelling two Russian diplomats last month for trying to bribe officials and foment protests against the name deal, which Greek nationalists are also determined to stop.

Moscow accuses Nato of trying to “drag” Macedonia into the bloc, and Skopje is alert to any meddling from Russia after its agents allegedly tried to stage a coup in nearby Montenegro in 2016 to stop it joining the alliance.

“We tell our Russian interlocutors behind closed doors and openly that this is not an either/or situation. But [Nato accession] is our goal, our business and our decision, and it shouldn’t necessarily mean that there should be negative relations with them,” Dimitrov said.

“We are going through critical days and weeks, we will have a referendum, and that means that forces who would like to make this process fail will focus – and are focused – on the communication part of things,” he added, reflecting on the threat posed by fake news and disinformation.

“We have to be vigilant. The stakes are too high. You could say this is too big to fail.”

The referendum is consultative, not binding, so whatever its outcome the government will proceed to the crucial, final stage of the ratification process – a parliamentary vote that will require some VMRO-DPMNE deputies to back the deal if it is to gain the required two-thirds majority.

“They couldn’t get to this point in 11 years [in power] . . . I hope they manage to think a bit more about the country and a bit less about their own political future,” Dimitrov said of the opposition.

“What we need now is visionary patriotism. To protect what needs to be protected, shake hands with neighbours and move forward,” he added.

“Especially given the uncertain times globally and how busy Europe is with other things, we cannot afford to wait for someone else to come to the Balkans and sort this out – it is time to step up.”