Irish woman in Barcelona: ‘We are very scared’ 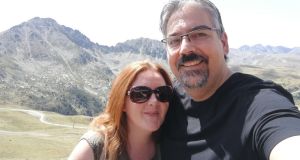 Patricia Armada and her husband Jordi

An Irish mother living in Barcelona has said that her 11-year-old son is afraid to leave the house as she fears for the safety of her husband at their local polling station.

On Sunday morning, the Spanish Civil Guard took to the polling stations in Catalonia to prevent what they deem an illegal referendum from taking place.

“I’m just sending a message from Barcelona about the situation that is happening here,” said Galway native Patricia Armada, who is married to a Catalan man and lives in Barcelona.

“We are very scared. I have an 11-year-old boy that’s too afraid to leave the house. He can’t watch television anymore, he has come off the mobile, he doesn’t want to see any more images. He’s really scared, I’m really scared. My husband is at the local polling station, he’s been there since 5am this morning. As we speak I’m waiting at the top of the hill, because we are being told that the Civil Guard are on their way to our nearest polling station.

“The scenes today are very violent and very scary. Young people, old people, children, are all being attacked, abused, it doesn’t matter, whoever is there. For no particular reason just, if they’re standing at all they’re being beaten,” she added.

“I’m really worried about how this is going to end, because the violence just seems to be escalating and the Spanish government seem to be in denial of this going on and they are saying the media is being cut and internet is being cut in certain areas,” Ms Armada, who works as a make-up artist in Barcelona, claimed.

“And I don’t think that it’s going to end here. I can’t see it ending. It’s continuing. Plastic bullets are banned in Catlaunya, yet Spanish civil guards are in the streets in Barcelona and firing shots into the crowd and beating people. And no problem with it? So I’m really, really worried. I’m really scared for the people who are at the polling stations, my husband being one of them. They are there securing their vote. And I don’t see where it’s going to end.”

“Yes they got to vote, but now it’s a matter of we’re all part of Europe. We’re all being told Spain is part of Europe, Catalunya is part of Europe, why then isn’t the Irish Government coming out and saying this is a disgrace? This is a disgrace what’s going on, an absolute disgrace. It’s disgusting. This is happening now in Europe, this is happening, here in Barcelona. People are being beaten on the street because all they want to do is vote. To make a decision on their future. And Irish people are here too.”