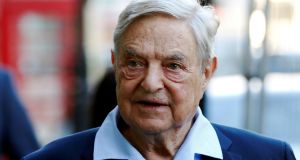 George Soros: The philanthropist said that Donald Trump “stands for that other form of government, which is the opposite of an open society. It’s really better described as a dictatorship or a mafia state.” Photograph: Reuters/Luke MacGregor 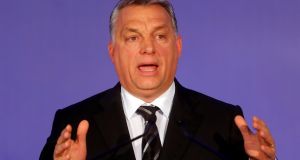 Viktor Orban: The Hungarian prime minister said that, thanks to Donald Trump, “the western world [has] the chance to free itself from the captivity of ideologies, of political correctness”. Photograph: Reuters/Laszlo Balogh

This is a tale of two Hungarians, powerful men who once shared the dream of a united Europe, but now glower at each other across a growing political divide.

One is George Soros, a Holocaust survivor and hedge fund manager whose bets against the pound “broke the Bank of England” in 1992, and who has spent billions worldwide fostering his vision of open, democratic and tolerant societies.

The other is Hungarian prime minister Viktor Orban, who 30 years ago was a young liberal intent on returning his communist-run nation to the western fold. Now he rails against the European Union, has built border fences to keep out refugees, and wants to create “an illiberal new state built on national foundations”.

For decades, as central and eastern Europe sought to shed its Soviet-era legacy and integrate with the West, Soros’s liberal philosophy was dominant.

Donald Trump’s rise confirms a turning of the political tide, however, throwing the Orban-Soros struggle into sharp relief and apparently convincing the prime minister that the time is ripe to finally purge Hungary of the tycoon’s influence.

For Orban, Trump’s victory was a “historic event . . . a big bang,” which gives “the western world the chance to free itself from the captivity of ideologies, of political correctness”.

Soros, his convictions undimmed by age – he is 86 – took a very different view. Denouncing Trump as “an imposter and con-man”, Soros said the new US president “stands for that other form of government, which is the opposite of an open society. It’s really better described as a dictatorship or a mafia state.”

Had Trump visited Budapest en route to Moscow in the late 1980s, he would have found pro-western activists such as Orban working closely with the Soros Foundation. It helped a movement cofounded by Orban called the Alliance of Young Democrats – known as Fidesz – with photocopiers and other essentials as it campaigned for free elections.

Orban received a Soros Foundation scholarship to study at Oxford University in 1989, before he returned to Hungary and entered parliament after the collapse of communism.

Fidesz abandoned its progressive roots in the 1990s, becoming a populist centre-right party with nationalist leanings. It enjoyed mixed electoral success before overrunning the corruption-addled Socialists in 2010.

Orban has used six years of dominance to rewrite Hungary’s constitution, co-opt formerly independent institutions and weaken its courts. His allies now control much of the nation’s media, and loyal businessmen are flourishing.

What critics see as a destruction of checks and balances and slide towards autocracy, Orban calls the cure for a country poisoned by decades of communism, which now refuses to be bullied by politicians and bankers in Brussels or elsewhere.

“The new state that we are building in Hungary today is not a liberal state,” Orban declared in 2014, a year before fencing off the borders to block refugees and migrants whom he considers a threat to Europe’s security and identity. “I don’t think our European Union membership precludes us from building an illiberal new state based on national foundations.”

Such a vision is anathema to progressives such as Soros, but chimes with the ambitions of Trump, Russian president Vladimir Putin and the populist leaders of several other European states from Poland to the Balkans.

In 2015, Russia banned Soros’s Open Society Foundation on the grounds of national security. Putin and his allies see Soros behind political upheaval everywhere, from Kyrgyzstan to Ukraine to Macedonia.

In the US, pro-Trump groups call Soros the key figure behind the Black Lives Matter movement and Women’s March on Washington, while critics in Europe – including Orban – accuse him of fuelling the refugee crisis to weaken nation states.

Last month, Orban predicted that 2017 “would be about squeezing out the forces symbolised” by Soros. “One can feel it coming,” he said, “that each country will trace the source of this money, the connections [between NGOs] and intelligence communities, and which NGOs represent which interests.”

Szilard Nemeth, the deputy chairman of Fidesz, said “these organisations must be pushed back with all available tools, and I think they must be swept out. And now I believe the international conditions are right for this with the election” of Trump.

Goran Buldioski, director of Soros’s Open Society Initiative for Europe, called the comments “a big surprise for a foundation that has been present in Hungary for more than 30 years and supported its democratisation”.

“This is a test for European values and democracies,” Buldioski told The Irish Times. “If an EU government feels free to attack civil society . . . it creates a really bad precedent, and I feel the EU should not only take note but take action.”

Government spokesman Zoltan Kovacs called for more transparency around civil society groups in Hungary – about 60 of which receive funding from Soros.

“Who pays them, and where do they get their funding,” he said. “If from abroad, are they expected to meet any requirements in return?

“Soros calls himself Viktor Orban’s opposition, and announces . . . that he is engaged in a campaign with a view to altering the internal political scene in Hungary,” Kovacs added. “This is something that must be duly evaluated in the national security committee.”

Soros, who left Budapest for London in 1947, once said he hoped that his foundation would help Hungary become “a country from which I wouldn’t want to emigrate” . He has no intention of backing down now before Orban or like-minded leaders in Washington and Moscow.

“We have our mission about furthering open society, and that mission is now attacked by many opponents,” said Buldioski. “So, in many ways, we should now work more and not less. We do not have plans to scale down, and we will operate for as long as we are able.”