Traditional US allies have criticised the US president Donald Trump's curb on immigration. Trump fought back on Sunday amid growing international criticism, outrage from civil rights activists and legal challenges. Video: Reuters 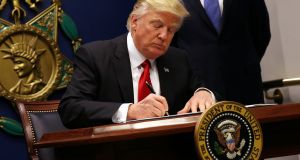 US president Donald Trump fought back on Sunday amid growing international criticism, outrage from civil rights activists and legal challenges over his abrupt order for a halt on arrivals of refugees and people from seven Muslim-majority countries.

He and senior aides sought to defend the policy and play down the chaos sparked by Friday’s order. But confusion persisted over details of implementation, in particular for green card holders who are legal residents of the United States.

In his most sweeping action since taking office on January 20th, Mr Trump, a Republican, put a 120-day hold on allowing refugees into the country, an indefinite ban on refugees from Syria and a 90-day bar on citizens from Iran, Iraq, Libya, Somalia, Sudan, Syria and Yemen.

“Our country needs strong borders and extreme vetting, NOW. Look what is happening all over Europe and, indeed, the world - a horrible mess!” Mr Trump wrote on Twitter on Sunday.

“Christians in the Middle-East have been executed in large numbers. We cannot allow this horror to continue!” he added, who has presented the policy as a way to protect Americans from the threat of Islamist militants.

Mr Trump’s comment could fuel charges that the new policy singles out Muslims. The militant Islamic State group has targeted minorities with brutal attacks and systematic oppression in Syria and Iraq, but it has also killed, tortured and punished both Shia and Sunni Muslims in areas under its rule.

In an indication that the policy is evolving on the fly, White House Chief of Staff Reince Priebus said on NBC’s Meet the Press, that the order “doesn’t affect green card holders moving forward.” However, he added that such people would be subjected to extra questioning by Customs and Border Patrol agents when they tried to re-enter the United States.

Our country needs strong borders and extreme vetting, NOW. Look what is happening all over Europe and, indeed, the world - a horrible mess!

Christians in the Middle-East have been executed in large numbers. We cannot allow this horror to continue!

Civil rights and faith groups, activists and Democratic politicians have promised to fight Trump’s order, which caused anguish for affected travelers and sparked protests at several US airports throughout Saturday.

Chuck Schumer, the senior Democrat in the Republican-controlled US Senate, said on Sunday his party would introduce legislation to overturn the policy.

Mr Schumer said he spoke with Homeland Security Secretary John Kelly to express his concerns about the order and Mr Kelly had told him that the executive order would not affect legal permanent residents.

“We need clarification. But it shows you, above the bad nature, the horrible nature of these (orders), the incompetence of this administration,” Mr Schumer told a news conference.

US Senate Majority Leader Mitch McConnell, a Republican, said on ABC’s This Week program, that it was a good idea to tighten the vetting of immigrants, but “it’s important to remember that some of our best sources in the war against radical Islamic terrorism, are Muslims, both in this country and overseas ... We need to be careful as we do this.”

A Republican colleague in the Senate, John McCain, was more critical, saying the order had been a confused process and could give Islamic State propaganda material.

“It wasn’t chaos,” Mr Priebus told NBC. He added that of 325,000 people who arrived from foreign countries on Saturday, 109 people were detained for further questioning, and most of them were moved out, with just a “couple dozen more that remain” detained.

Such travelers were spared the threat of deportation by a federal judge in Brooklyn, New York, who granted a temporary reprieve late on Saturday evening.

The American Civil Liberties Union, representing two Iraqis caught by the order as they flew into the country, successfully argued for a temporary stay that prevented travelers denied entry to the United States from being deported.

Federal judges in three states followed the one in New York in barring authorities from deporting affected travelers in orders issued late on Saturday or early on Sunday.

Separately, Democratic attorneys general from California and New York were among states discussing whether to legally challenge the order, according to officials.