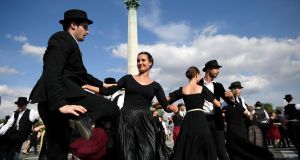 Folk dancers in Heroes’ Square in Budapest on Thursday, as Hungary marks the centenary of the Treaty of Trianon, which saw large swathes of the country divided among neighbouring countries following the first World War. Photograph: Tamas Kovacs/EPA

Hungary has pledged to work closely with its neighbours while maintaining strong ties with their Hungarian communities, as it marked 100 years since it was stripped of two-thirds of its territory and more than 3 million citizens.

The treaty signed on June 4th, 1920 in the Grand Trianon Palace in Versailles punished Hungary for its role on the losing side in the first World War, by depriving it of swathes of land that are now part of Romania, Serbia, Croatia, Ukraine, Slovenia, Slovakia and Austria.

Since taking power in 2010, prime minister Viktor Orbán has sought to strengthen links between his nationalist government and about 2 million ethnic Hungarians who now live in those former parts of the Austro-Hungarian empire, about half of whom have been granted citizenship of Hungary and can vote in its elections.

At 4.30pm on Thursday, the time the treaty was signed, church bells rang across Hungary and in Hungarian communities around the region, and public transport in Budapest came to a halt for a “minute’s silence”.

What the great powers broke, we must fix. If we do so, the curse of Trianon will be broken

“Given that the nation’s geographical borders have changed, no one can dispute our right to maintain our nation’s spiritual borders,” Hungarian president János Áder told a special session of parliament.

He described as “immeasurably unjust” a peace treaty that he said had been “concocted by unprepared politicians, political adventurers, self-appointed prophets, paid agents, biased and partly corrupted experts and journalists infected with a hatred of Hungary”.

A recent survey showed that 85 per cent of Hungarians regard the treaty as the greatest tragedy in the nation’s history, and Mr Áder said it had “failed to bring about peace, did not contribute to the region’s development, nor did it help ease ethnic tension” in the region.

He insisted that historical grievances must not sour regional relations now, however.

“What the great powers broke, we must fix. If we do so, the curse of Trianon will be broken,” he said.

“We respect our neighbours but we ask them to also respect us and the Hungarians living in their countries. We have to work for each other, not against each other.”

Efforts by Mr Orbán and his ruling Fidesz party to be seen as the defenders of Hungarians everywhere are often regarded as unwelcome meddling by other governments.

Ties with Ukraine are strained over a language law that would reduce the amount of teaching its schools offer in minority languages, and calls by the Hungarian community in Transylvania for autonomy are a perennial source of friction with Romania; in the latest row over the issue in Bucharest, Romanian president Klaus Iohannis was fined €1,000 for making derogatory statements.

“It does not matter who is right-wing or left-wing, liberal, green or conservative at this time, because Trianon is an all-Hungarian issue,” said Bence Tordai, a senior member of the liberal Párbeszéd party.

“Some people reserve the right to say who is a real Hungarian and who is not . . . I call them the champions of division and hypocrisy.”

1 Covid-19: Taoiseach warns of restrictions in Ireland’s cities as hospital cases pass 100
2 Covid-19 cases higher in areas with large proportion of renters, CSO says
3 People asked not to cross Border as Donegal prepares for Level 3 restrictions
4 How Finland kept Covid in check and protected its economy
5 Aer Lingus staff say they are living in ‘near poverty’ and unable to cover rent
Real news has value SUBSCRIBE