Greece reels from wildfires as death toll climbs to 80 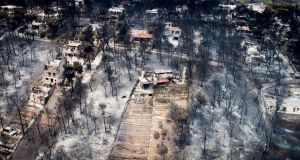 An aerial view shows burnt houses and trees following a wildfire in the village of Mati, near Athens, Greece on Wednesday. Photograph: Antonis Nicolopoulos/Eurokinissi via Reuters

Greece was struggling on Wednesday night with the devastating effects of wildfires which hit the region of Attica this week as the death toll from the tragedy rose to 80.

Brian O’Callaghan-Westropp, an Irish citizen, was on Wednesday confirmed to be among the victims. He was in Mati resort, on his honeymoon with his wife Zoe Holohan, just a few days after their wedding.

At least 187 people have been listed as injured, 64 of whom are still hospitalised: 60 adults (11 in intensive care) and four children (none in a serious condition).

At the same time, dozens of families are still waiting to establish whether loved ones have been killed. About 100 people are still reported to be missing, although there is no official figure.

Firefighters were on Wednesday night still battling multiple fronts of fire in Kallitechnoupoli, which was the initial front of Monday’s wildfire, Kineta and Korith.

Mati was one of the seaside resorts that was ferociously hit, almost razed to the ground, by Monday’s fire.

Mr O’Callaghan-Westropp and Ms Holohan were reported to have been fleeing from the area during the blaze before becoming separated amid scenes of panic. Ms Holohan was taken to hospital in Athens where she has been treated for burns.

More than 600 people from Mati and Rafina, the other badly hit resort, jumped into the sea on Monday night. Many had to swim for hours away from the coast. The coast guard, fishermen and locals with private boats rescued most of them later, and took them to the local port of Rafina. Several people drowned. Rescue teams are continuing to search for survivors day and night.

Tragic stories have emerged, one after the other, since Tuesday, as eyewitnesses reported what they saw or experienced during the blaze. A 13-year-old girl was killed jumping from a cliff after her clothes went on fire. The bodies of her father and her brother were found later, burned, in one another’s arms, a few metres away.

The bodies of families and individuals – 26 people in total – were also found embraced in groups, trapped together in a field, just 15 metres from a path to the coast they never reached.

Experts report that measurements taken by meteorological stations indicated exceptional conditions in Attica during the wildfires, with gusts of wind that reached record speeds of up to 120km/h. The extreme conditions might explain why so many people, as well as authorities, failed to evaluate the danger in time, and remained in the area until it was too late.

The Greek anti-terrorist service was on Wednesday investigating suggestions that the blaze in Mati was started deliberately, a security source told Reuters.

Greek authorities announced a number of relief measures. They included allowances of €5,000-6,000 for individuals and families and of €8,000 for enterprises that were affected by the wildfires, compensation for those who lost members of their families and extra allowances for children who lost their parents.

In addition, the Greek state opened a bank account for donations from abroad to assist victims of the wildfires and it will make a first contribution of €40 million to this account.

The postmortems and identification procedures are taking place at a morgue at Shisto, west of Athens. With most of the corpses badly charred, identification of the dead will be challenging, experts said.

“Work has started on identifying the victims of the wildfires but the majority of the bodies are totally charred,” Grigoris Leon, head of the Hellenic Society of Forensic Medicine, told Reuters.