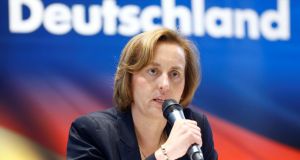 Beatrix von Storch of Alternative for Deutschland: law has allowed her to stir up resentment against minorities and portray herself as the the victim of the politically correct “elite”. Photograph: Hannibal Hanschke/File Photo/Reuters

A growing chorus of critics, from opposition parties to Germany’s journalism federation, says the well-intentioned law is slippery paving on the road to freedom of expression hell.

For “evidently unlawful” material the deadline is 24 hours, while hate speech or fake news that isn’t strictly illegal must vanish within seven days.

The law was Berlin’s response to what it saw as foot-dragging by social media companies called on to respect postwar Germany’s stringent hate speech laws. These laws, a historic response to the abuses of the Nazi era, have come under unprecedented attack in the social media era – particularly over a tsunami of fake news and online abuse beginning in the refugee crisis of 2015-2016.

Presenting the law last year, Mr Maas said his ministry had noted a tripling of hate speech and other criminal content on social media platforms, “from incitement to murder journalists and set fire to asylum-seeker homes to threats and insults, defamation … lying about Auschwitz”.

But a series of high-profile post deletions and account suspensions have revived criticisms from last year that Mr Maas was heading a “Ministry of Truth”.

The first case involved Alternative für Deutschland (AfD) deputy leader Beatrix von Storch. Her Twitter account was suspended after she suggested a New Year’s greeting on Twitter from Cologne police was their way of “mollifying the barbarian, Muslim, gang-raping hordes of men”.

When she was blocked by Twitter she switched to Facebook, posting: “Happy New Year in a free country in which everyone can call barbarians barbarians, even if they are Muslims!”

When Facebook blocked her page, too, a freedom of speech martyr was born. The satirical magazine Titanic posted a satirical tribute to the politician: “And why is the German police using Arabic numerals anyway? I’m not going to dial 110 as I’m being raped by the barbaric hordes!” It, too, was blocked by Twitter.

Amid a growing row, critics worry private companies are more likely to censor posts than argue the toss and risk a hefty fine over what precisely qualifies as “evidently unlawful” content. Other critics are nervous at the “black box” nature of the censorship: social media companies demand transparency from their users but are notoriously reticent to discuss themselves and their private decisions.

Left Party politician Anke Domscheidt-Berg, a digital specialist, says: “We want more criminally relevant hate to vanish from the net but this is the wrong way and the wrong law.”

More than 50 complaints have been filed against the law, while Dr von Storch – her Twitter feed operational once again – faces about a dozen criminal complaints about her “hordes” Tweet.

The NetzDG law, just 10 days old, has allowed her acres of media coverage and a stage to grand-stand on two favourite issues: stirring up resentment against minorities and portraying herself as the the victim of the politically correct “elite”.

Defenders of the law point out that it has its uses: forcing a Twitter ban for another AfD politician who, last week, used a racial epithet to describe tennis star Boris Becker’s mixed-race son.

Amid a growing row, some media outlets have called for cool heads and calm debate. Citing liberal intellectual Ralf Dahrendorf’s remark that “there’s no progress without a fight”, Die Zeit added: “Democracy and freedom can only develop further by sharpening one’s arguments.”