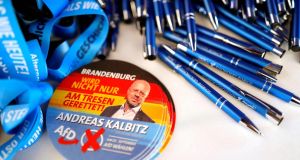 One consistent colour stands out in the charts after eastern Germany’s weekend elections: a broad, bright strip of Alternative für Deutschland blue.

In its first six years the AfD has transitioned from a party of angry bailout-critical economists to an anti-immigrant alliance that continues to drift even further right. In eastern Germany it has now made the leap into political prime time after finishing two election races in second place.

In Saxony it nearly tripled its vote to 27.5 per cent to take 37 of 118 seats in the new Dresden parliament. With just 4.6 per cent separating them, it is breathing down the neck of the ruling Christian Democratic Union (CDU). Over the border in Brandenburg, the state surrounding Berlin, AfD support nearly doubled to 23.5 per cent and it finished less than three points behind the ruling Social Democratic Party (SPD).

As the dust settled on Sunday evening, jubilant AfD leaders insisted theirs was now a conservative Volkspartei – a local German version of a catch-call party and a term previously reserved for the centre-right Christian Democratic Union (CDU) and the Social Democratic Party (SPD).

Such claims are a little premature - at federal level the party has established itself in the Bundestag as largest opposition party but is competing with other smaller parties on a steady 14-15 per cent in polls. But it is fair to say that - even separating out local special factors - the weekend polls flagged greater changes underway in Germany’s wider political system.

One major reason for the AfD’s success in two eastern polls has always been its protest vote potential. Eastern Germans - belated arrivals in the current political system - have weaker political affiliations than their western cousins, more ready to switch their allegiance on election day.

This time around, though, there was no single issue dominating voters’ minds. Welfare and education or security or climate were all in the mix, but even the hot-button issue of migration pre-occupied just a third of AfD voters, usually obsessed with the issue.

Fear of the future

Instead voters were preoccupied by a diffuse feeling of Zukunftsangst – fear of the future. Some 84 per cent of AfD voters - including the quarter of a million non-voters it reactivated told polling agencies they were “concerned that our lives will change too much” in the future.

Interestingly, asked which party has the best answers for looming challenges, by far the biggest group - 39 per cent - said no party.

On traditional eastern priorities - asylum/refugee policy and eastern regional concerns - the AfD was head of two key challengers: CDU, which has governed Saxony since 1990, and the Left Party. It trounced the post-communists nearly three to one at the Saxon ballot box. Both here and in Brandenburg, the successor party to East Germany’s ruling party received levels of support in line with national averages.

There was a key eastern component to this vote - and to the AfD surge. Two thirds of Saxon voters and 59 per cent of Brandenburgers believe, 30 years after the fall of the Berlin Wall, that easterners are still second-class citizens - rising to 77-78 per cent among AfD voters.

All of these numbers point to the disillusionment factor in Germany’s east: with mainstream politics, with the promises of 1989, and their promises for the future. Helping the AfD is its novelty factor: it has never served in an eastern state government and has yet to disappoint voters when election promises meet Realpolitik. That makes it a perfect choice for protest voters.

Federal politicians from Germany’s mainstream parties who gathered in Berlin on Monday for post-mortem election analyses know they cannot simply brush off their weekend election humiliations to special eastern circumstances.

The SPD - leaderless since June - still insists it is a Volkspartei even after its worst-ever result in a German election - eight per cent in Saxony. This week prospective new leaders begin a pushing schedule of regional conferences in a desperate bid to give Germany’s oldest party back a profile - and some hope. The CDU, which finished first in Saxony yet lost a fifth of its vote to the AfD there, is gripped by a debate over whether its centrist politics needs a stronger right-wing boost.

Meanwhile the AfD’s Sunday night success is likely to catalyse its long-running internal struggle, with wind in the sails of more extremist eastern leaders and more moderate western conservatives on the back-foot.

Until now the party has succeeded with a dual strategy - pushing nationalist and xenophobic buttons in the east and peddling tweedy conservative concern in the west - but each election success pushes it further into the mainstream, forces it to adopt a consistent profile and gives its political rivals new insights into tackling the recent populist arrival.

For now at least, all other German parties have vowed to shun the AfD in looming coalition talks in Brandenburg and Saxony. As a result they will need new flexibility - and possibly a shift from two- to three-party coalitions - to form majorities. That lesson from eastern Germany may soon become reality at federal level. The rise of Germany’s blue block - on German election nights and in German parliaments - is changing the face - and tone - of German politics.