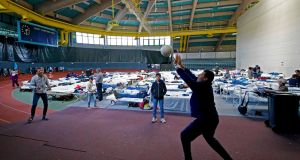 Migrants play with a ball at a temporary shelter in a sports hall in Hanau, Germany. Photograph: Kai Pfaffenbach/Reuters

German police have called for refugees to be housed along religious and ethnic lines after a series of mass brawls in emergency accommodation.

Last week, a fight between up to 200 Syrians and Afghans in a Leipzig shelter turned into a running battle with residents using table legs as clubs. In Lower Saxony, police reported about 100 Syrians and Albanians fighting each other with bits of bicycles and other objects. Last month, meanwhile, police arrested 14 people after a melee at a shelter in the eastern city of Suhl, with other incidents recorded in Bonn, Dresden and Trier.

With Germany’s forecast of 800,000 refugees this year likely to be rounded up to one million, police have warned politicians in Berlin to intervene before a tragedy takes place.

Among the many reasons for the violence, police representatives and refugee groups see overcrowding, exhaustion, post-traumatic stress as well as cultural and religious misunderstandings. “When more than 1,000 people from 18 nations live together it has potential for a certain level of escalation, that’s clear to me,” said Maik Mackewitz, mayor of Calden in Kassel.

On Sunday, two separate incidents took place at a shelter there, leaving 14 injured. The first fight, a lunchtime canteen dispute, involved about 60, police said, while a second spat in the evening saw more than 350 involved.

A month after chancellor Angela Merkel insisted Germany could “master” the refugee crisis, signs are increasing that Europe’s largest country is struggling to register record numbers of asylum seekers.

Germany’s interior ministry said on Tuesday that September would be a record-breaking month for refugees – well over the 105,000 accepted in August.