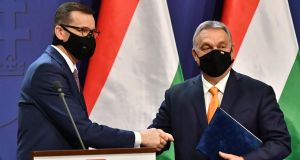 Polish officials said a possible deal was in sight to unblock the European Union’s €1.8 trillion budget and economic recovery package, which Poland and Hungary vetoed over a link between access to funds and respect for the rule of law.

Agreement could come at an EU summit starting on Thursday, at which leaders hope to give final approval to the bloc’s €1.1 trillion budget for 2021-27 and a €750 billion fund to help members bounce back from the coronavirus pandemic.

“At the moment, a preliminary agreement has been outlined, and work and discussions on it are ongoing,” Polish president Andrzej Duda said on Wednesday, as EU presidency holder Germany led talks with officials from Poland and Hungary in Brussels.

In Warsaw, Polish deputy prime minister Jaroslaw Gowin said: “For now we have agreement between Warsaw, Budapest and Berlin. I believe this agreement will also include the 24 remaining European capitals.”

After talks in Warsaw on Tuesday evening, Mr Orban said he hoped for a “Polish-Hungarian victory”.

“I think we have a good chance to close this issue this week at Thursday’s EU summit. We are a centimetre away,” he added.

Any compromise deal will have to satisfy EU states that want the bloc to crack down on corruption and abuses of democratic norms, and also hardliners in Hungary and in Poland’s increasingly fractious coalition government who vow to defend their sovereignty from “meddling” Brussels.

Budapest and Warsaw have clashed repeatedly with the EU in recent years, as their nationalist leaders have expanded government control over the law courts and media while putting pressure on NGOs and refusing to take in refugees.

One element of a deal is likely to be a so-called interpretive declaration, making clear that the rule-of-law criteria would not extend to national policies on asylum, gender or the family; this would allow Hungarian and Polish leaders to claim victory – even though the EU does not intend to link funding to these issues.

Another much-discussed element of a compromise could be agreement that member states can challenge the rule-of-law mechanism at the European Court of Justice – a process that could take years, delaying the imposition of any financial penalties until after, for example, Hungary’s parliamentary elections in 2022.

EU officials have warned the two veto-wielders that the bloc could launch the recovery fund without them and operate with a provisional budget next year.

“I cast aside the choice: veto or death,” he said. “The alternative for the United Right government would be early elections, which would not serve Poland well during a pandemic.”